‘I Will Definitely Come Back:’ County Commissioner Amazed by Shen Yun’s Talent 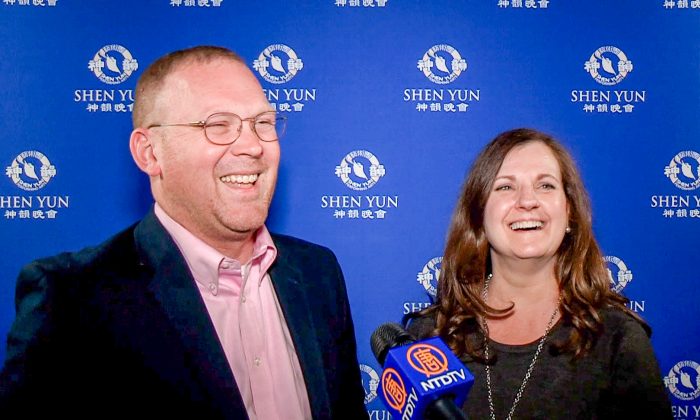 KNOXVILLE, Tennessee—As soon as the curtain lifted and the light hit his eyes, county commissioner John Gardner knew Shen Yun Performing Arts was going to be the best stage production he would see in a long time. And he wasn’t disappointed.

“It’s probably the best cross between athletics and theater and culture you’ll ever see,” he said.

Gardner, who is a commissioner for Sullivan County, experienced Shen Yun with his wife Debra Gardner at the Tennessee Theatre on March 26.

New York-based Shen Yun’s mission is to revive China’s 5,000 years of civilization and traditional culture and showcase it to the modern people. Through about 20 vignettes audience members are able to visit different dynasties, ethnic groups, as well as learn about different stories and beliefs that have informed the Chinese people’s way of thinking for millennia.

His wife Debra praised the performers for their talent, adding that the performance served to provide her with a better understanding of China’s traditions and values.

“The colors are beautiful and their talent is just amazing,” she said. “I’ve learned a lot like the traditions between the male and the female roles.”

Gardner thought it was important that Shen Yun has an opportunity to openly express the positives and negatives of Chinese history.

“I said it’s important to the history. Even the good parts of your history [and] the bad part of history. You learn from the mistakes,” he said.

Shen Yun has many stories that showcase historical events, myths and legends passed down generation after generation, and modern day pieces portraying today’s real-life human rights abuses in China like the persecution of Falun Gong.

Falun Gong, or Falun Dafa, is a spiritual discipline that has helped over 100 million Chinese people today understand and return to the essence of traditional Chinese culture. By following its tenents of “Truthfulness, Compassion, and Tolerance,” adherents seek to orient themselves toward self-betterment, taking responsibility, and putting others first.

Stories depicting the persecution in the production portray themes like spiritual devotion, the benevolence of gods, good and evil retribution, and the search for the meaning of life, according to the company’s website. Such values are foundational to traditional Chinese culture and are not political in nature. Instead, they inspire audience members and encourage them to reflect on the modern world.

After learning about the persecution through the performance, Gardner said he would never want to see such oppression on people due to their belief.

“I just hope that we live in a world that no one will ever be persecuted for their faith, regardless of what it is,” he said, adding that despite this “good [people] will prevail.”

Overall, Shen Yun was so intriguing for the Gardners that they both expressed their intention of wanting to return to see another performance in the future.

“I will definitely come back, I wish I could have brought more people with me this time,” Gardner said.

“It’s been a joy day here. I’d love to come back and see another performance,” Debra added.