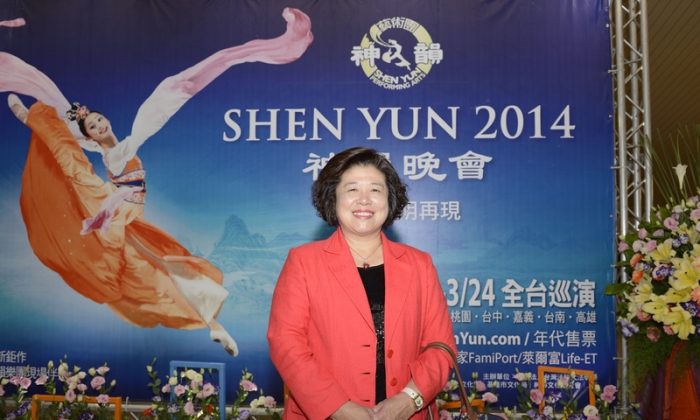 TAICHUNG, Taiwan—On the afternoon of March 15, Ms. Tsai Jing-Ying, chairwoman of Hsinchu Branch of the National Women’s League of Republic of China (Taiwan), who is Hsinchu City Mayor Hsu Ming-tsai’s wife, exclusively came all the way from Hsinchu City to Taichung City to attend the show staged by Shen Yun Performing Arts International Company at the Zhongshan Hall.

After seeing the performance, she exclaimed in an excited tone, “I feel deeply fascinated, and have a touching feeling.” She added that Shen Yun illustrated Chinese cultural in the form of dance. It let everyone know the preciousness of the traditional Chinese culture, and she felt that her “soul was purified.”

Established in 2006, New York-based Shen Yun is a non-profit organization that has sought to revive 5,000 years of Chinese culture through the performing arts. Having reached millions of people across roughly 20 countries and over 100 cities, Shen Yun is now widely regarded as a global phenomenon.

Ms. Tsai expressed that though she often watched arts performances in various places, it was her first time to have the feeling of being touched. “Shen Yun’s live performance is indeed very fascinating. During the process of the performances, (I had) a feeling of being in the scene personally. I was deeply moved,” she explained.

Shen Yun Orchestra is composed of Chinese and Western musical instruments. With foundation in Western symphony, it successfully blends with the Oriental music featuring 5,000 years of Chinese civilization. This orchestra is not an ordinary accompanying musical company, it’s an orchestra of high international standard.

“(Shen Yun) orchestra’s live performance is like what we see in other countries. It’s very unique, and very good.”

“Every program is amazing. In fact, every piece is so special that I was deeply impressed. The animated digital backdrops are really great,” she exclaimed.