‘I love it’ Says Actress on Shen Yun 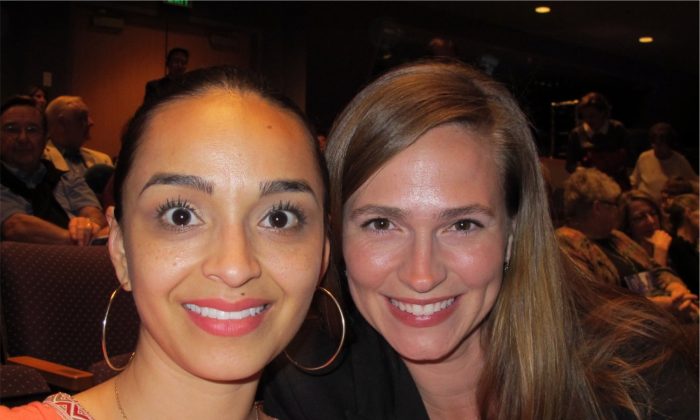 Catherine Georges, an actress, and her friend Ms. Hill, a dance major, were among the audience.

According to its website, at the heart of Shen Yun is classical Chinese dance. “Known for its incredible flips and spins, and its gentle elegance, it is one of the most rigorous and expressive art forms in the world.”

Ms. Georges said, “I just think the women are so delicate and so precise, and I love watching the energy of the group. They all seem to be in sync. … It was really nice.”

As a dance major Ms. Hill was particularly drawn to the dance.

Shen Yun’s website provides a wealth of information, “Entirely non-profit, and independent of the Chinese regime, Shen Yun enjoys the artistic freedom of New York, enabling it to now bring these ancient traditions to the stage. Shen Yun and its mission have drawn top talent from around the world; many artists are winners of international competitions in dance, choreography, and music.”

Shen Yun performances include not only the famous myths and legends from ancient China, but also depictions of issues from today’s China.

The “Mongolian Chopsticks” is a lively dance which portrays the “free-spirited vitality and boundless, expansive expression” of the Mongolian males after a long ride across the grasslands.

“The Steadfast Lotus” is a true story from today’s China which shows the courage of a mother and daughter as they are persecuted for practicing Falun Dafa meditation, and at the end highlights their steadfast faith bringing hope.

Referring to “The Steadfast Lotus” Ms. Georges said, “I had no idea that that was going on in China, that people were being persecuted for their faith in that way, in such a severe way.”

Ms. Hill liked the Lotus segment for many reasons.

She said, “in the midst of chaos, finding peace and beauty, and learning how to channel that. I think she did such an amazing job, regardless of the circumstances, that she faced. She had to center herself to what was true. It was beautiful.”

The website explains, “In 1999, the Chinese Communist Party (CCP) initiated a persecution campaign against Falun Dafa, a meditation discipline based on the principles of truthfulness, compassion, and tolerance.” The persecution is ongoing today.

Ms. Georges added, “I thought it was a great cultural piece, just to share with everybody here in America, like this is really happening today, it’s going on now.”

Ms. Hill added she would tell people “That they need to come see Shen Yun!”