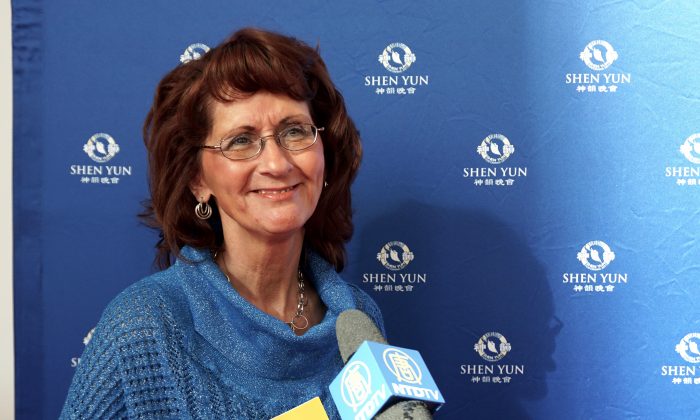 Ariel Kim saw Shen Yun perform at the Kennedy Center Opera House in Washington, D.C., on Feb. 20, 2016. Ms. Kim, who works in the IT industry said that the performance "had a sense of wholeness." (Courtesy of NTD Television)
City

‘I felt like I was dancing with the gods,’ Says Shen Yun Theatergoer

WASHINGTON, D.C.—There are many reasons to go see a performance: a fun evening out with friends, a love for the arts, or simply for entertainment. For Ariel Kim however, it was a unique dream that made her decide to go see Shen Yun Performing Arts in Washington on Feb. 20.

Ms. Kim lives in Manassas, Virginia, about an hour from Washington, D.C. She had never been to the Kennedy Center Opera House to see a performance until she went to see New York-based Shen Yun there.

In an interview after watching the performance, Ms. Kim explained the divine inspiration that had led her to Shen Yun.

First, she received a Shen Yun brochure. The company advertises 5,000 years of Chinese civilization, the revival of a divinely inspired culture that was once nearly lost.

Then, she felt as if the Buddha and Bodhisattva Guanyin—known as the goddess of compassion in ancient Chinese culture—wanted her to go, telling her she should align with this performance.

So she called a friend who was a member at the Kennedy Center, and they decided to see Shen Yun.

Ms. Kim soon discovered the experience was even more divine than the inspiration that led her to Shen Yun. She felt the power of the performance as soon as the curtains went up.

It was “a divine wholeness that you could feel inside your heart,” she said. “You can feel it when you’re watching it on the stage, the actions of the performers. It was just divine.”

“When the curtains went up, I could feel the energy slowly coming off the stage and slowly coming into my being, into my heart, and my mind and my soul. I could feel the power. The dancers were just spectacular. The energy that comes off those people was amazing. That energy will bring transformation to all of its audiences,” Ms. Kim said.

It made you feel connected to the divine.
— Ariel Kim

For Ms. Kim, the performance was unlike any other. It left her with an feeling she hadn’t experienced before.

“I felt transformed. I didn’t feel like I was in my seat in the theater. I felt like I was dancing with the gods.”

At the core of Shen Yun’s performances is classical Chinese dance, an art form nearly as old as Chinese civilization itself.

“It was spectacular. Just spectacular. The production, the choreography, the art, the dance, the color, the music, and the instruments,” Ms. Kim said.

It was out of this world. It had a sense of wholeness.
— Ariel Kim

“It was out of this world. It had a sense of wholeness.”

In its performances, Shen Yun seeks to showcase the true essence of China’s traditional culture, much of which has been lost under communist rule in China. For thousands of years Chinese people called their country “the divine land.” It was a time when Buddhist, Taoist, and Confucianism flourished and were at the center of society.

The stories that Shen Yun depicts are set both in ancient as well as contemporary China. One such piece set in more recent times, called “Monks and the Red Guards,” takes place during the Cultural Revolution (1966-76) which nearly wiped out China’s traditional culture in favor of communist and atheistic theories.

“It’s so important not to get stuck in the material world and just the economic world.”

While Shen Yun has performed in over a hundred cities around the world, it is unable to perform in China itself, as China’s Communist Party still represses any spiritual or traditional beliefs.

“I did not realize that there is still no expression of religion or the arts in China,” Ms. Kim said.

“I am going to give my prayers for the transformation, so that people can one day in China be able to express their religion and the arts,” she said.