‘I Feel Like a Million Bucks,’ Says Audience Member After Shen Yun Performance 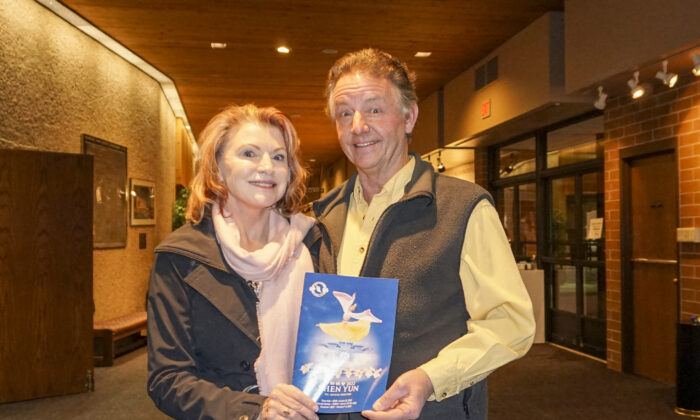 CHEYENNE, Wyo.—The brilliant dancing and music are not the only things that Shen Yun Performing Arts is known for. Audience members sometimes share that Shen Yun leaves them with indescribable happiness. The couple Matthew Trefren and Ann Jones shared their feelings about Shen Yun after attending the performance at the Cheyenne Civic Center.

“It’s amazing. It’s off the charts. It’s world-renowned and it’s amazing to experience this in such a small town here. Such a fabulous event. It’s like you’re on a different planet, you know, watching it. That performance is fabulous,” Mr. Trefren shared.

“I’m not even touching the earth. What we just saw there—it puts me in a different spot in life. Great spot. Heavenly spot,” he elaborated.

They shared that opinion that in order for the dancers of New York-based Shen Yun to be so synchronized and so light, there has to be something spiritual making it possible.

A lot of divine intervention comes into play for everybody to be in sync.
— Matthew Trefren

“You know, it’s hard to explain, but it’s something that you don’t feel every day, that’s for sure. It’s got a lot to do with spirituality. Because it’s so put together, so many moving parts. And a lot of divine intervention comes into play for everybody to be in sync,” Mr. Trefren said.

As Shen Yun performs around the world, audiences members often share that they are filled with energy after experiencing the performance.

The performance shares values of truth and compassion. Shen Yun dives into values that China had before communism including filial piety and loyalty.

“When you see things like this, it brings peace to your life and makes you want to be a better person, kinder. And if you do wrong to someone, apologize to him and move on. [It] makes you a better person to see stuff like this. I could see this again and again,” Mr. Trefren shared.

Ms. Jones added to this saying that Shen Yun gives people a sense of optimism and reminds everyone to have compassion.

She shared that Shen Yun gives one “the message of hope in this terrible time when the world is so bleak and dark. We should have faith and we should have compassion and hold our focus on the higher dimensions, the higher realms and to be patient because I’m sure that eventually, our Creator will return.”

The couple wanted to share their gratitude to the artists of Shen Yun.

“Thank you so much. So much appreciation for dedicating your life and how beautiful you are and how talented you are. And thank you for sharing your beautiful gifts with us and with the world and keep going, don’t stop,” Ms. Jones said.

“From the orchestra to the people that put it together to the dancers to everyone. It’s such an aura there that just is unbelievable. And there are saints among us,” Mr. Trefren said.

Knowing that the pandemic has been keeping people away from live arts, Ms. Jones advises these people to “Stop living in fear. You’ve got to live.”

“You have to do what you think is right when it comes to this type of stuff. You recognize the hazard and you understand the defense when it comes to masks and then live your life. Don’t live it in fear,” Mr. Trefren added.