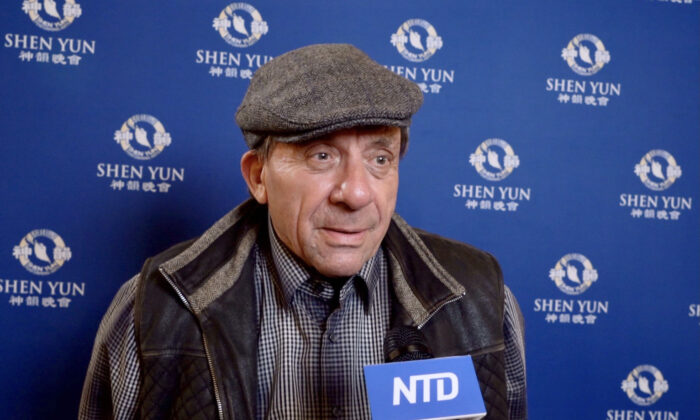 A storyteller, journalist, consultant, and agriculturalist—among other talents—Olson is the syndicated host of Food Chain Radio.

He said he returned to enjoy Shen Yun again because the first time, “It was so much fun … it was beautiful and it was inspirational, and it was bringing spirit back to the spiritual season of Christmas.”

Shen Yun presents China’s 5,000 years of a divinely-inspired culture, where it was once believed that heavenly beings walked among mortals. Ancient Chinese society also believed that culture was a gift from the Gods.

Olson agreed with this ancient world view and said that, after watching Shen Yun, “[people] feel that way too.”

“And where would we be without that,” Olson added, “because without spirit, we have nothing to guide us, other than other people telling us what to do.”

“I feel uplifted and I feel full of life again. When I walk out this door tonight, I am going to do so with a smile on my face,” he said.

Also in the audience was Bob Miller, an eye surgeon and owner of Advanced Valley Eye Associates. Over the years, Miller has donated his time, equipment, and talent to treating underprivileged patients in Mexico and other countries who would otherwise have no care. He has also traveled to China with the World Eye Foundation where he has taught and performed surgery.

“We thought this would be a wonderful way to remind ourselves of what’s going on in China,” he said.

Based in New York, Shen Yun plays throughout the world but has been banned by the Chinese communist regime from performing in China.

Miller said of China’s repressive ruling regime, “It’s certainly not a culture that’s conducive to different points of view, right? It’s a culture that’s arrived by stamping out anybody who might say something different.”

Included in the repertoire is the portrayal of the over 20-year-long persecution of Falun Dafa, a spiritual practice that follows the tenets of truthfulness, compassion, and tolerance. The persecution illustrates how freedom of expression and belief is suppressed in China today.

“I think we forget about our freedoms that we have in this country, or that they have in Taiwan. The reality is, we’re right at a crux in our society … where we’re starting to stamp out the ability to be able to say something that doesn’t toe the line,” Miller said.

“And I think this is a stark reminder of just how it can be, if we’re not watching ourselves carefully to allow real diversity of opinion. And that, sometimes, means opinions that don’t go along with what we read in the newspapers or what the government says is the right thing to believe.”

“I think it’s a beautiful thing even to begin by saying, ‘We believe that all of us came from divinity, and then we come here and we live a life on this earth’,” he said of the ideas explored in Shen Yun.

“I think that gives people the idea that you should watch yourself, try to remember the divine inside of you, and try to live a good, clean life … be kind to others [and] do as you would like to be judged in the afterlife.”