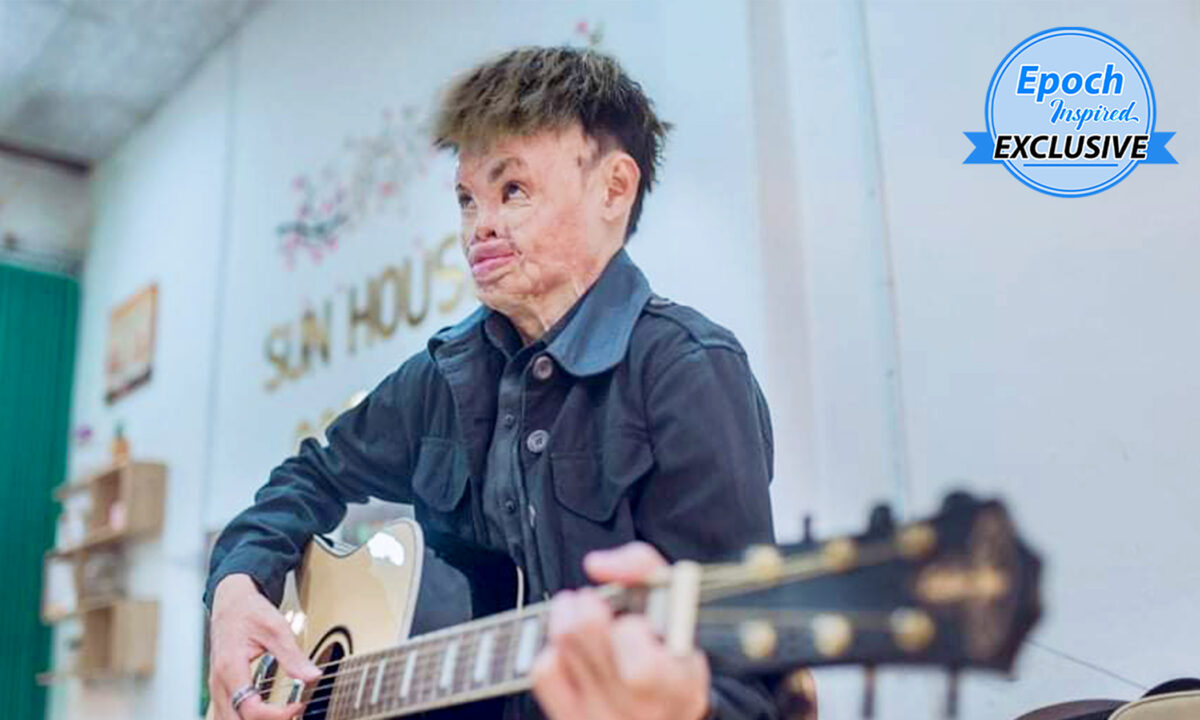 ‘I Am More Than How I Look’: Burn Survivor Goes From Hiding at Home to Opening Bakery

'It’s my dream now to help others. It is by giving back that one can make a difference in society.'
BY Anna Mason TIMEMarch 6, 2022 PRINT

A bright and cheerful place, Hai’s coffee and cake shop displays many of the best things about Vietnam. But behind the light, colorful atmosphere and warm hospitality lies an immense story of struggle and bravery.

The owner of Sunhouse Coffee, Ngo Quy Hai, 27, is a burn survivor who overcame all odds to open his own prize bakery in his birthplace, Kon Tum city. His enrolment in KOTO, a hospitality training school in Hanoi that supported him in finally learning to write after years of childhood bullying, was his launchpad.

Before this, there would be many, many challenges for Hai to have to face.

“I am more than how I look,” Hai told The Epoch Times. “Do not call me harsh words. I am a survivor.”

Hai was just a toddler when the accident that would forever change his life happened. Pushing a baby walker in the kitchen, he fell into the woodstove, resulting in burns to a large part of his body.

“Baby walkers were common back then and there wasn’t knowledge about how dangerous they can be,” he said.

After the accident, Hai was transported to Children’s Hospital 1 in Saigon where he remained for two years undergoing lifesaving intensive care and treatment. Many reconstruction treatments would follow, but he was left with significant scarring.

He had to brave through emotional trauma and bullying to carve out a niche for himself.

“I felt alone growing up and didn’t have many friends,” said Hai. “I felt ostracized from society. When I tried to find work, I was mocked and ridiculed. I didn’t leave my house at one point for almost two years.”

Hai was bullied too much to attend school, a situation that resulted in him falling far behind academically. He says he was lucky to find that one good friend who himself had disabilities, and they bonded.

“Sometimes I think it is fate that brought us together,” Hai said of his friend. “We’ve played together since we were very young and have experienced many joys and sorrows as we both shared the same sadness that no one wanted to play with us.”

Recalling a childhood incident that fostered his dream to open his own bakery, Hai said that, at around 10 years old, he was out with his friend when they passed by some big shops they had never seen before. Both boys were entranced by one in particular; a beautiful bakery.

The pair decided to save their money and one day walk proudly into the store and purchase a cake. It took months for them to save enough. “The price was quite high for us country kids but as soon as we had it, we returned to the bakery,” said Hai. “It was my friend’s birthday and I was so excited that we would eat cake on his birthday.”

The young boys ran as fast as they could. But as soon as they entered the door, the security guard and staff kicked them out, he said. “We were very poor so our clothes weren’t as fancy as some people’s and they didn’t listen to our explanation either. They chased us away.”

Hai said that his friend cried a lot as they tried to explain they had the money, to no avail.

“It was humiliating,” said Hai, “But it’s an experience that has made me who I am today. It made me know in my heart what I wanted to do. I was going to open up my own bakery so I could bake delicious and beautiful cakes and serve good food to everyone, whether they be rich or poor. I would not discriminate; everyone would be welcome.”

Hai says, despite all the hardship, he has also experienced much love and support along the way.

In 2016, sponsored by charity organization Interplast, he flew to Germany for surgery to separate the skin under his chin that was attached to the skin on his chest. The surgery was successful, he said, but he remained in a coma for 21 days and was “quite homesick.”

“The nurses and doctors at the hospital were so kind to me,” he recalled. “They played music from my hometown and even learned basic Vietnamese greetings. The work of the surgeons there changed my life. I felt positive in myself and in my future for the first time ever. I am forever, so thankful.”

Attending KOTO helped Hai realize he was amongst others who’d experienced hardship and felt alone in life. He said that, at first, he was behind because he couldn’t write nearly as well as his classmates. After around two months, spending all his free time writing and practicing, he became fluent.

“I met so many people and my classmates always included me. For the first time, people put their arms around me in photos,” he said. “Everyone there at KOTO has their own story. We see each other as brothers and sisters and there’s no difference between us.”

Amazingly, considering all he’s been through, Hai considers himself fortunate.

“Funnily enough, many times I’ve been in the hospital, I’ve seen people come in with more severe burns but they’re still optimistic,” he said. “I see myself now as being a lucky person. I am here now to help others.

Hai says that his family members are his “first and foremost” and the “biggest supporters.”

“They are a source of positive energy for me to overcome the difficulties of society that I will continue to experience because of the way I look,” Hai said. “I ask that people look past that. There is more to me.”

Having proved his might as a successful businessman with a passion for baking and music, now it’s Hai’s goal to raise money to help children in difficult circumstances, and bring joy to underprivileged children in his hometown. He recently hosted a fundraiser where they gave out milk tea, cake, and played music.

“It was lovely to see so many smiling faces,” he said. “I see a lot of children on the streets selling lottery tickets and I always invite them in for a piece of cake. We don’t know the hardships others have faced. Be kind.

“It’s my dream now to help others through similar hardships that I have been through. It is by giving back that one can make a difference in society.”