Catholic Sister Says, ‘I am getting into the whole experience’ 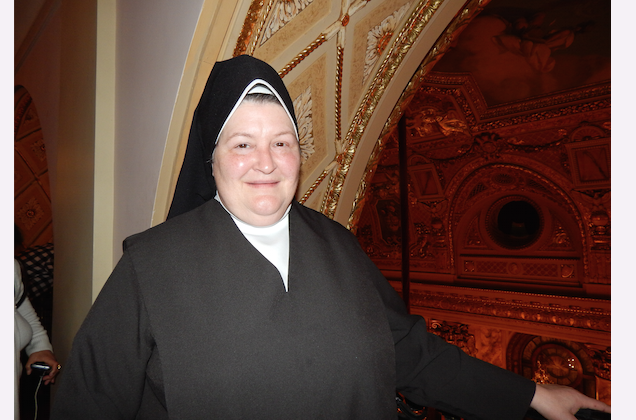 Shen Yun is a New York-based company with the mission of reviving 5,000 years of traditional Chinese culture through music and classical Chinese dance. Established in 2006, Shen Yun has multiple companies touring the globe simultaneously.

“The culture of China that it’s preserving, that’s what I really appreciate,” Ms. Wetzel said.

Ms. Wetzel was especially touched by The Steadfast Lotus, a dance about a mother and a daughter. In the dance, the two Falun Gong practitioners become targets of communist police and get beaten. According to Shen Yun’s program book, Falun Gong is a meditation practice based on the principles of truthfulness, compassion, and tolerance,

That piece depicts the plight of practitioners of Falun Gong in their peaceful resistance to the modern-day persecution by the Chinese regime.

Ms. Wetzel was so overwhelmed with each dance, song, and the overall performance, she said she’d love to learn more about the company.

“There’s a spiritual underpinning to all the different pieces,” Ms. Wetzel said.

“Everything is so beautiful, I’m getting into the whole experience.”