Hyatt Regency Director of Finance: ‘Shen Yun Is a Must See’, ‘Outstanding’ 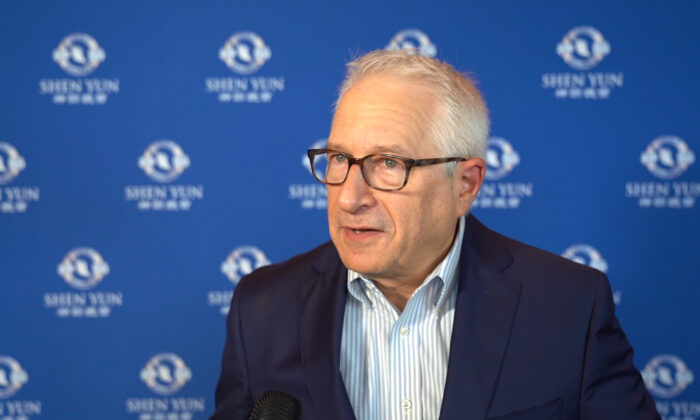 ATLANTA—Buzz about the world’s top classical Chinese dance company crackled through Atlanta, Georgia this week as Shen Yun Performing Arts presented its unique brand of classical Chinese dance at the Cobb Energy Performing Arts Centre. Word reached Hyatt Regency Atlanta’s Director of Finance, who felt he could not miss the New York-based company’s artistic phenomenon before it left the city.

Sitting in the front row, Jay Aven, who has been with the illustrious mega-hotel company for 40 years, said at intermission, “I wanted to get very, very good seats so I could be a part of it, so I could feel the excitement that I’m really enjoying.”

“[Shen Yun is] a must-see, a must-see. I’ve seen a lot of advertising on television, posters, billboards, people talking about it, seeing it online. It made me just say, ‘Hmm, I have to see this before it leaves town.’ It leaves town tomorrow, so, last performance, I’m glad I got in. Outstanding. I can’t wait for the second half to see the message that’s being sent,” Aven said.

Shen Yun’s mission is to revive China’s ancient and deeply-spiritual civilization. This purpose is imbued into its seven touring companies, each with a full cast of male and female classical Chinese dancers, couture costumes, a live orchestra, bel canto soloists, and animated backdrops.

Aven applauded the show’s many aspects.

“The costuming is fantastic, the mechanics, the dramatic staging of the folks on stage, the stories that are being told. There’s fun stories … I think the animation is fantastic. The screens and how the characters are animated come down and then all of a sudden they pop out for real.

“I am very fortunate to be in a very front row, and I’m very close, so I can see the expressions on their faces, how they’re telling the stories as well. I’m also very close to the orchestra, and that is fantastic,” Aven said.

Aven was saddened to learn about the persecution going on in China today against the spiritual discipline Falun Dafa.

“It seems that they [the Communist Party of China] put down the tradition of the culture, and they don’t allow it there. That comes out in some of the plays … It’s something that I’m learning about just reading about Shen Yun, reading about what it means, what it stands for, the divinity,” he said.

China was once known as “The Divine Land” and Shen Yun’s artists feel they cannot overlook ancient China’s spiritual essence in their revival of that ancient culture.

According to Shen Yun’s website, “Shen Yun Performing Arts was established by Falun Dafa practitioners in 2006. The company’s mission is to use the performing arts to revive the essence of Chinese culture—traditionally considered a divinely inspired civilization. Since the CCP is officially an atheist regime, it is afraid of the freedom of expression this arts company enjoys in the West.”

Did Aven himself feel the divinity that Shen Yun aspires to embody?

“Yes, I feel that. I feel the divinity. That’s what the ‘Shen’ means, the divine. So I’m feeling that as the characters look up to the skies, look up to the divinity, to the spiritual, the religious portion of it. Again, it’s a shame that the country [China] doesn’t bring that in, that they have to go out of [China], they can’t perform in the country, they have to come here or go around to other countries to tell their story.”

“The message is kind of sad in that respect,” Aven said. “People are being persecuted.”

“I think the message is that there is a God, there is a powerful spirit that is guiding the folks and giving them their inner being and leading them. This is the message that, unfortunately, it seems like the communist government is squelching,” he said.

With reporting by Frank Xie and Brett Featherstone.