Husband and Wife Say Shen Yun ‘Good for the Soul’ 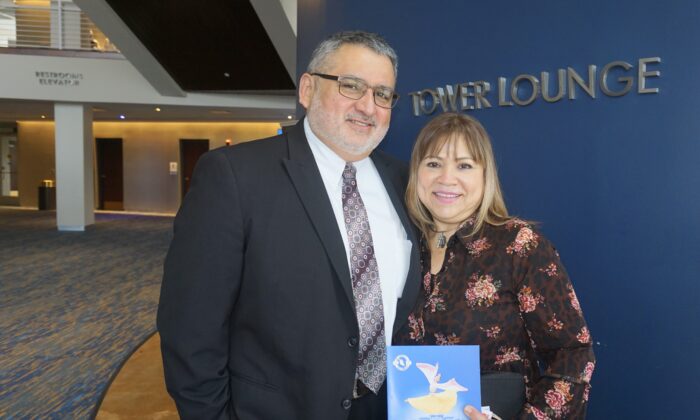 McALLEN, Texas—Sara Salas, who works in accounts payable for the Diocese of Brownsville, and her husband Ted, an accountant for the federal government, attended Shen Yun Performing Arts at the McAllen Arts Center on April 23.

Sara said she enjoyed everything, “especially the flowers,” and Ted agreed.

Ted said that he and Sara rarely go to the theater, but “it was worth it.”

“Just seeing the colors and the way they maneuvered the flowers to make them bloom,” he said of the dancers.

“It’s good for the soul; it heals. During these times that we’re going through, we need something like this,” he said.

Sara appreciated Shen Yun’s mission to revive the traditional culture of China that has been destroyed by communism.

She said the performance reminded her why she needs to go to church. “Because we’re so blessed and very privileged that we can go,” she said. “Our freedom is just unbelievable. [In] China, some people really would give their lives not to be held back.”

She felt happy for the freedom she enjoys in America. “We tend to forget because we are very blessed to have that liberty here in the United States.”

Ted concurred: “I mean, we take for granted the freedom that we have to worship, however, we want to worship. And this reminds us how, not just China, but many countries around the world right now don’t have that freedom. It’s good to open our eyes and make us not take things for granted. Enjoy every day that we have here.”

Based in New York, Shen Yun is unique in that, in addition to presenting classical Chinese dance and music, much of the performance draws from China’s rich spiritual heritage of 5,000 years. Up until the communist takeover, Taoism, Buddhism, and Confucianism formed the basis of Chinese life.

Triumph for the Human Spirit

Rene said she was emotional seeing all the stories, the choreography, and the music of Shen Yun.

“Everything is wonderful. We can’t wait for them to come back next year,” she said.

Laurie loved the spiritual aspect of Chinese culture presented in the performance.

“I love it. Spirit is very, very, very strong with every culture, but in Chinese culture, it’s so traditional, and it’s carried from one family member to the next, and through the generations. It’s very impressive. I think it’s something that we all need to be in touch with.”

She said she loved all the dances. “I love them all. But, you know, the Falun Gong and, the Monkey [King] … I don’t know them by name, but they were all very, very good.”

Laurie said her son especially liked the Monkey King dance story. “I think some interesting stories were told, and lessons learned,” she said.

Laurie said the story of the persecution faced by the peaceful Chinese spiritual practice Falun Gong should be told.

“It brings the spotlight [on] something that I think the whole world should be paying attention to because that is something that is still going on,” she said. “The attention span of people is very short, and with so many things happening around the world, we tend to overlook certain things that have not been corrected.

“And where people are suffering, it’s very important to bring awareness,” she said.

Laurie noted that the show gave her joy and a feeling of “triumph for the human spirit.”