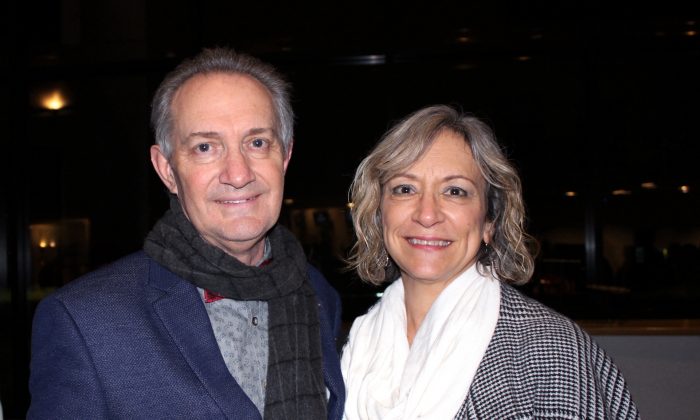 Nick Archer is the Vice President for World Concern, a charitable organization. He came with his wife, Lisa Archer, to see the classical Chinese dance company.

New York-based Shen Yun features many stories that draw from 5,000 years of Chinese history and culture. One that stood out to Mr. Archer most was the story-based dance “The Ties of Affection, the Tao of Destiny”, which follows a predestined connection between a sculptor and an officer’s daughter.

He also loved “Fairies of the Clouds” which takes the audience to graceful celestial maidens in the clouds, spoken of in Chinese legends.

“I liked the theme of the woman who makes the garden come alive, in the green,” said Ms. Archer, referring to “Elegance of the Qing Dynasty,” which is set in a flourishing garden in the Qing Dynasty.

“That was very beautiful.” said Ms. Archer. “But many of them were my favorite.”

Mr. Archer resonated with universal spiritual themes he saw drawn out from the traditional Chinese culture as presented by Shen Yun.

“I very much resonate with … the challenges that mankind faces, how we aspire to be moral people, those kinds of things,” he said.

Shen Yun has a patented animated backdrop that surprises theatergoers and blurs the border between the story world and the theater. The couple enjoyed that.

“That was so amazing. I thought y’all are so clever,” said Ms. Archer.

“That was very clever,” agreed Mr. Archer. “The way they disappeared and then came out was very well done.”

“And every picture I noticed something was moving, the water, or the other things, and it made it look alive, it was very well done, very creative,” Mr. Archer said.

“The show was fantastic,” he said. “The vibrancy of the colors and the dance are absolutely tremendous, and the stories they tell are so vividly told, with great characters who truly tell the tale of what we are seeing. So fabulous.”

Biggar particularly enjoyed the tale of “The Queendom” based on the Chinese classic “Journey to the West” that follows a Tang dynasty monk and his companions, Sandy, Pigsy, and Monkey.

In “The Queendom” the monk and his companions come across a land of only women, a lake of fertility, and a queen secretly possessed by a scorpion.

“That was phenomenal because I thought the monkey did a great job,” said Biggar. “The scorpion was really exciting, but to see the transition on the big screen from the stage, was truly amazing.”

“They really literally jumped in the screen,” said Biggar, “which I thought was fabulous. Absolutely. So that part of it too was really enjoyable, the technology they’re using.”

Biggar appreciated the expression of the vast Chinese culture through its traditional art forms.

“There’s so much in Chinese culture and the history of the country and the people. … There’s just so much to know,” he said. “But one thing I do know is that every region, every province, every town, every village shares their story, their history, their culture, through these amazing forms of art: song, instrument, dance, sculpture. So it’s really amazing. There’s so much to learn in Chinese history hardly anybody could learn it all.”

Shen Yun was formed in New York in 2006 by artists who wanted to revive the traditional Chinese culture and bring it back from the brink of extinction. Each year they tour the world with a new production, sharing the 5,000 year culture with audiences all over the world. Through classical Chinese dance, solo musical performances, and a live orchestra that features instruments like the erhu and the pipa over the foundation of a Western orchestra, audiences come to know the authentic traditional Chinese culture.

“I think that’s a brilliant way of doing it,” said Biggar. “I think through the cultural arts, it speaks to everybody. You don’t have to know a lot to learn a great deal from the culture and the arts that we see today.”

Biggar also said that Shen Yun could have a good affect on young people all over the world.

“I think also a great thing about Shen Yun and the performances we’re seeing, is that the younger generation, not only [from] countries around the world that see it, but I believe of China as well, could have a far better understanding and appreciation of the history, the thousands of years that it goes back, and everything of which it is founded on is incredible.”

The traditional Chinese culture is spiritual, and Shen Yun conveys that spirit.

“I think it’s very necessary for people to understand a little bit more about the religious beliefs and values that people have across the world,” Biggar said.

Biggar thought of a few words that he would use to describe Shen Yun to people who haven’t seen it yet.

With reporting by Sean Lin and Carrie Gilkison.