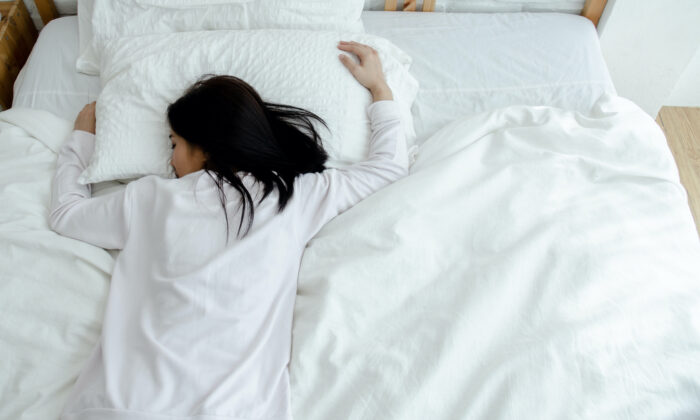 Lying in the prone (face-down) position, in which your chest is down and your back is up, could be a simple way to improve outcomes in cases of severe respiratory distress. This topic has received renewed attention during the COVID-19 pandemic, as invasive mechanical ventilation is conventionally delivered with the patient lying on their back in the supine (face-up) position.

“Mechanical ventilation is the main supportive treatment for critically ill patients” infected with novel coronavirus 2019 (COVID-19), according to a February 2020 study published in The Lancet Respiratory Medicine. However, reports suggest that many COVID-19 patients put on ventilators don’t make it.

In a JAMA study that included 5,700 patients hospitalized with COVID-19 in the New York City area between March 1, 2020, and April 4, 2020, mortality rates for those who received mechanical ventilation ranged from 76.4 percent to 97.2 percent, depending on age. There are many reasons why those on ventilators have a high risk of mortality, including being more severely ill to begin with.

However, given the poor outcomes, some physicians are now trying to keep patients off ventilators as much as possible by using alternative measures, including having patients lie on their stomachs (prone) to allow for better lung aeration.

It’s also possible that prone ventilation, which is ventilation delivered with the patient lying in the prone position, may help patients who aren’t responding to conventional ventilation in the supine position, as well as reduce mortality in those with acute respiratory distress syndrome (ARDS).

Prone Positioning Lowers Death Rate in Those With ARDS

In 2013, a study published in The New England Journal of Medicine found that early application of prone positioning may improve outcomes in people with severe ARDS. During the study, 466 patients with severe ARDS were randomly assigned to receive prone-positioning sessions of at least 16 hours or to stay in the supine position.

Not only have previous studies found that oxygenation is significantly better among patients in the prone position compared to the supine position, but prone positioning may also prevent ventilator-induced lung injury.

In the video above, Jonathan Downham, an advanced critical care practitioner in the UK, explains why prone positioning can be so beneficial for those with ARDS. Using a simple example of a sponge filled with fluid, he shows how the direction of drainage changes depending on the sponge’s position.

In ARDS, the lung’s air sacs, or alveoli, become damaged. Fluid leaks through the air sacs’ damaged walls and collects. Fluid in the lung will increase its weight, which then squeezes out the gas from the dependent regions. If the sponge represents a fluid-filled lung, in the supine (on the back) position the dependent regions are at the back of the lung.

While the fluid in an ARDS patient’s lung is more evenly distributed than the sponge model suggests, it helps to show how the increased lung mass squeezes out the gas of the gravity-dependent lung regions, and why the lung densities shift when moving from the supine to the prone position.

According to Downham, this shift can occur in a matter of minutes after changing a person’s position. Differences in shape of the lungs and chest wall also come into play.

Imagining that the lung is like a slinky, Downham then shows how, when a patient is in the prone position, the weight becomes much more evenly distributed, allowing for better ventilation.

When in the supine position, several factors, including gravitational forces and increased pressure from the wet lung combine to have a detrimental effect on the alveoli in the lower lung. The prone patient, however, suffers less from these effects. Other benefits also occur with prone positioning, including:

Prone positioning can also help with stress and strain on the lung. It also reduces lung inflammation in ARDS patients and may reduce the severity and the extent of lung injury caused by mechanical ventilation.

Support for Early Use of Prone Positioning

Increasing research suggests that prone positioning should be used systematically in the early management of severe ARDS, and not reserved as a rescue maneuver or a last-ditch effort. As noted by a pathophysiology-based review published in the World Journal of Critical Care Medicine, “Current evidence strongly supports that prone positioning has beneficial effects on gas exchange, respiratory mechanics, lung protection, and hemodynamics as it redistributes transpulmonary pressure, stress, and strain throughout the lung and unloads the right ventricle.”

The researchers suggested that prone positioning seemed to be beneficial in most cases of ARDS and recommended that “early use of prolonged prone positioning in conjunction with lung-protective strategies decreases mortality significantly.” For best results, other researchers have suggested that prone ventilation sessions should last 12 to 18 hours per session and should be begun early, within 36 hours of diagnosis.

It’s also been suggested that the physiological changes that occur with prone positioning may be even more favorable in spontaneously breathing patients than in those who are intubated.

A 2003 study found, in fact, that the prone position led to a rapid increase in partial pressure of oxygen, or PaO2, which is a measure of how well oxygen moves from the lungs to the blood, among patients with respiratory failure. All of the patients in the study were able to avoid mechanical ventilation.

In the case of COVID-19, some experts suggest that all patients who are awake and able to adjust their own position should use the prone position for two- to four-hour sessions, two to four times a day.

How to Use Prone Positioning at Home

Some hospitals have also released instructions for self-proning, which can be used at home for people with cough or trouble breathing. If you’re struggling to breathe, you should seek emergency medical care. However, in cases of cough or mild shortness of breath being treated at home, guidelines from Elmhurst Hospital recommend not spending a lot of time lying flat on your back.

Instead, it suggests “laying [sic] on your stomach and in different positions will help your body to get air into all areas of your lung.” The guidelines recommend changing your position every 30 minutes to two hours, including:

This is a simple way to potentially help ease breathing difficulties at home and, if you or a loved one is hospitalized, can be used there, too. If your health care providers don’t suggest it, ask whether prone positioning could help.