Hotel Manager Wants Everyone to Go and See Shen Yun 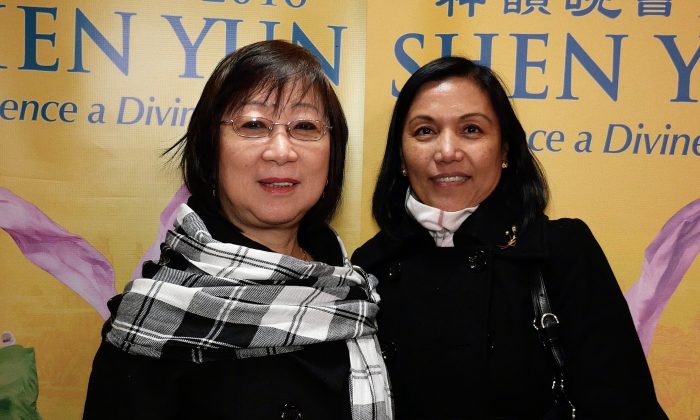 Carmencita Ngo and her friend after enjoying Shen Yun Performing Arts at the Academy of Music in Philadelphia on Jan. 9, 2016. (Courtesy of NTD Television)

PHILADELPHIA—After three years of wanting to see Shen Yun Performing Arts, Carmencita Ngo, a hotel manager in Delaware, finally did so on Jan. 9 at the Academy of Music after her son bought her tickets as a special birthday present. And she didn’t simply enjoy the performance. She loved it.

Seeing Shen Yun, Mrs. Ngo, who is of Chinese descent but raised in the Philippines, felt surprised, enlightened, and blessed.

Overwhelmed with emotion, she described the performance with endless gasps and exclamations. “It’s amazing, fantastic, awesome!”

“You feel alive. You feel lighter. You feel something is there,” she said. “It gets your emotion, your feelings.”

Every year, New-York based Shen Yun awes millions of audience members around the world like Mrs. Ngo with not only skills of the performers but also with the messages and hope and beauty and spirituality. With their performance, Shen Yun brings audiences members on an uplifting and inspiring journey through several millennia of traditional Chinese culture and history, as their website states.

“That is enlightenment—when you see something that makes you happy. That is the most important thing—the emotion. It gets me,” she said, deeply moved as she took in everything she saw.

Watching Shen Yun gave her an increased appreciation for traditional culture, something she says many people no longer value as much as they should as a result of rapid modernization and technological progress. “At present, people have sort of forgotten about it because of the fast pace of life,” she said, “so they don’t enjoy the small things. It’s always fast, fast, fast, forward, forward, forward.” But Shen Yun drew out these often-overlooked intricacies and brought them to life on stage.

Within Shen Yun, she saw perseverance and discipline and an inner peace, rooted in ancient Chinese spiritual beliefs like Confucianism, Daoism, and Buddhism, which taught the Chinese how to cultivate and better themselves. But these values are still vitally important for people today, Mrs. Ngo said, so she was happy Shen Yun could put the spotlight on these traditional ideas.

Describing Shen Yun, Mrs. Ngo burst with excitement about every aspect of the performance from the dancing to the unique props like the drums and the handkerchiefs to the vibrant costumes like the headpieces and shoes.

“I advise everybody to watch the show,” Mrs. Ngo concluded. “Don’t take any chances. Don’t waste your time. Come and see the show.”