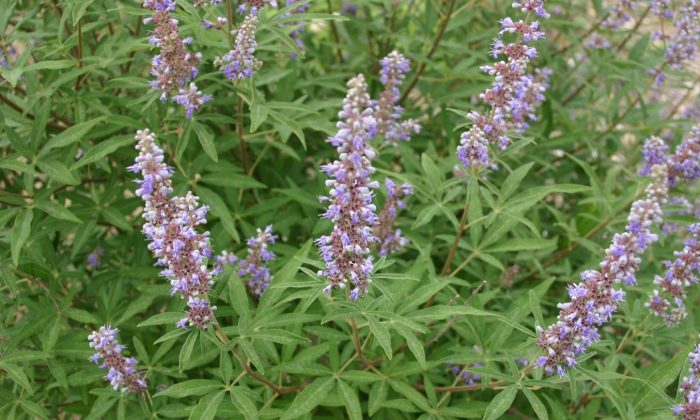 Vitex is a Mediterranean native and a favorite herb for thousands of years. (Sten Porse/Wikimedia Commons).
Alternative Health

Vitex berry has been a favorite herb for hormonal balance for a long time. The great Roman physician Dioscorides filled more pages on vitex than any other herb in his five volume Materia Medica written about 55 AD.

Today, vitex is primarily used to treat female hormonal problems such as irregular periods or a difficult transition into menopause. Clinical studies show vitex to be especially beneficial for PMS symptoms such as headaches, irritability, and sore breasts. Commission E (the German equivalent of the U.S. Food and Drug Administration) approves vitex for various menstrual complaints.

Some women specifically use vitex to stimulate their libido and increase their fertility. Strangely enough, this herb also has an ancient association with chastity.

Although there is no clinical study supporting such action, vitex had a long standing reputation for cooling sexual passions and was once considered a helpful aid for those seeking a celibate life. Old names for vitex such as chaste tree and monk’s pepper nod toward such uses.

How can vitex turn some people on and others off? According to Margi Flint, author, adjunct professor at Tufts University School of Medicine, and a practicing herbalist for over 40 years, vitex is what is known as an amphoteric herb.

Amphoteric herbs are all about balance, which means their action can adjust to what the situation requires. Flint says the most famous example is yarrow, an amphoteric herb that has been used for centuries to both break up blood clots and stop bleeding in a gushing wound.

Vitex is a shrub native to the Mediterranean (Italy and Greece). The plant can grow to the size of a small tree, and shares some resemblance to lilac, another charming ornamental with lavender flowers. The medicinal part is the berry, which tastes like a peppercorn—pungent, aromatic, and bitter, although the entire plant has been a symbol of chastity from the ancient Greeks to the Romans, in Medieval Europe, and through the Renaissance.

The five-fingered shape of the aromatic leaves suggests a hand, lending further insight into its amphoteric character.

No study has yet identified how exactly vitex works its balancing act, but there are clues suggested by its actions. Vitex berry appears to target the pituitary gland, a pea-sized organ located in the center of the brain.

For such a small gland, the pituitary has an enormous influence on the entire endocrine system, so anything that can influence it will have a profound effect on hormonal balance. This master gland produces the hormones used by nearly every other gland in the body.

Vitex is believed to inhibit male sex hormones called androgens. Both men and women need androgens but too many can be problematic. Men with a high concentration of androgens, such as testosterone, can become overly aggressive or infatuated with sex. Women with too many androgens may not be able to menstruate.

Males may get scared to take vitex when they hear about its celibacy reputation. But this herb won’t really turn you into a monk. However, it may take the edge off of sexual obsession, which can be a welcome relief for some teen boys.

“You can tamp down their being run by those hormones,” Flint said. “It makes it safer for everyone.”

Vitex doesn’t contain hormones itself, but has a regulating effect on the hormonal system. According to Flint, vitex nourishes the pituitary so the entire endocrine system can come back to a place of homeostasis.

Vitex is used to treat a variety of symptoms related to hormonal imbalance, such as acne, insomnia, and hot flashes, as well as mental and emotional upset. This suggests that vitex may regulate the production of neurotransmitter chemicals in the brain, such as dopamine and serotonin.

“When your hormones are out of balance, it changes the nature of who you are,” Flint said. “Vitex used during the menopausal years can take a woman who is expressing herself in unpleasant ways so she can go back to being a sweet-natured woman.”

Although vitex is often available in capsules, Flint says a tincture is a better choice. It not only better preserves the berry’s delicate essential oils, it is also easier to assimilate. Most studies examining the effects of vitex use a tincture.

Dosage can vary widely—from several dropperfuls a day, to just a few drops. It’s always best to consult a qualified herbalist to determine the correct dose for your condition, but Flint has a handy rule of thumb.

“More emotionally-based issues are going to require small doses. Physical ailments, like a fibroid or not getting your period, will tend to require large doses,” she said.

Flint also recommends using vitex freshly ground in a peppermill as one reliable method of administering it.

“If you mix it with peppercorns it’s going to blend right in,” she said.

Vitex is considered a very safe herb, but it is still important to use it mindfully. For example, vitex may interfere with the effectiveness of birth control pills, resulting in a surprise pregnancy.

“Unless they had PMS and irregular periods I would not recommend using vitex for teenage girls. A lot of teens go on birth control without their parents knowledge so I wouldn’t risk it. Vitex is much better for them short term, as long as you know they’re not taking birth control pills, and not sexually active really. But for the menopausal years it’s perfect.”

Flint says vitex should only be reserved for hormonal imbalance, and only until the problem resolves. To maintain general, everyday hormonal wellness, Flint recommends more food-based herbs such as maca, burdock root, and mushrooms.

“Medicinal mushrooms have a positive effect on all the endocrine glands, so that’s something that everyone can use to help stimulate their function in a safe way,” she said. “If you have medicinal mushrooms and burdock, you’re golden.”