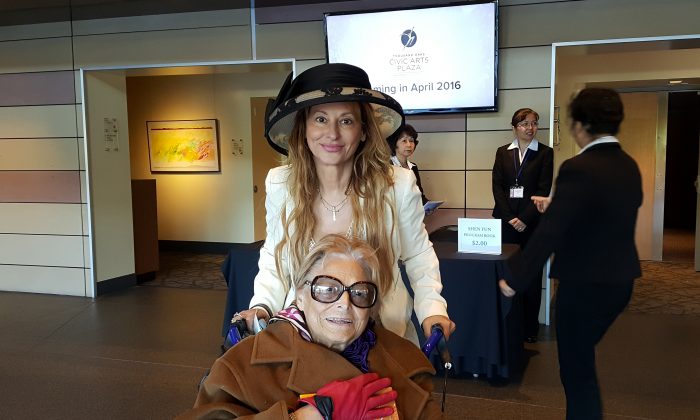 THOUSAND OAKS, Calif.—Bonnie Palef wanted to give her mother Beverly Palef something extra special for her 82nd birthday. She bought her the one thing Beverly mentioned really wanting, tickets to Shen Yun Performing Arts matinee, on March 23rd, at the Fred Kavli Theatre.

They were both delighted with the gift!

“This is the first time I’ve seen the show and I thought it was fabulous, absolutely fabulous,” said Bonnie. “More people should see it!”

“It was a lovely present and a lovely way to spend the afternoon,” said Beverly.

Bonnie Palef is a Hollywood feature filmmaker. She was born in Canada, and at the age of 18 received her Bachelor’s Degree in Fine Arts, Film and Art History, with honors from Toronto’s York University. There was no looking back for her afterward. She became a member of the Writer’s Guild of Canada that same year and has been busy working on major productions in the United States and Canada ever since.

As an award winning filmmaker, her accomplishments include but are not limited to the development and production of many Oscar-nominated films for Paramount, Miramax, Disney, Fox and Universal studios.

When one sees Shen Yun they are immersed in a civilization that was almost lost due to the Communist Chinese Party seizing power some 60 years ago. The Shen Yun website states, “Since the dawn of Chinese civilization, its culture has been rooted in spiritual traditions. The ancients believed that their culture was divinely inspired. They told of gods bestowing wisdom from the heavens, and understood that good is always rewarded and evil punished.”

Two vignettes bring people insights about events happening today in communist China and the courage of the practitioners of the spiritual self-cultivation practice Falun Gong, which has been severely persecuted in communist China since 1999.

“I think it’s very important to have the scene, where the young people were dressed in modern clothes, to bring it into this age in the show,” Bonnie said.

Spirituality is extremely important for Bonnie and her mother.

“The spirituality is what life is about. We lose too much of that in our society today and this kind of show brings it back,” she said.

One of the modern vignettes was important for Bonnie, “The Steadfast Heart.”

Shen Yun’s program states,”This story takes place in a town in contemporary China, where people are practicing Falun Dafa also known as Falun Gong. In this scene, a light-hearted couple has just finished sewing a banner that reads, “Falun Dafa is Good.” They are then joined by a group of young ladies about to start their morning Falun Gong exercise routine.

“However, policemen soon arrive and attack the meditators, arresting and beating them. The husband holds up the banner in their defense, but he is arrested, as even such simple words are illegal in China today. In jail, torture shatters his mind and body. He survives the ordeal a broken man, with his wife left to pick up the pieces. But then, in the midst of their despair, a heavenly scene unfolds, and he is given salvation and renewal.”

“When Communists hit the young man and knocked him down, yet spiritually they couldn’t knock him down,” she said. “That’s how you rise above pain. It’s what theater and film is about.”

“There should be more shows like this,” added her mother.

‘It Was Just Magnificent’

Both Bonnie and her mother Beverly were impressed with every aspect of the Shen Yun performance.

She felt the dancers’ movements were exquisite. “These dancers, you could see the emotion in their bodies,” she said. “It was just magnificent.”

Bonnie felt the idea of the beautiful world above projected on the backdrops was very uplifting.

Shen Yun’s website says, “A digital-backdrop team creates vividly animated settings, extending the stage and transporting the audience to a world where heaven and earth are one.”

She was also very appreciative of being touched spiritually by Shen Yun.

“It makes you think, but it makes you feel in a spiritual way, which is rare,” she said,”It’s very, very rare, the combination of emotions that you feel in this show.”

Her mother added, “It’s good for all ages … and it was entertaining!”

“It’s much more emotionally moving than other shows that have dance in it. It’s much more powerful but it’s a lot of fun and very uplifting,” Bonnie said.

“I’ll definitely tell people about it,” she added,”I took an extra program to see where they are next, all the places, to tell my friends.”

“The psychological and emotional underpinnings of the story was magnificent. I’ll come again. I’ll come every year,” she added.