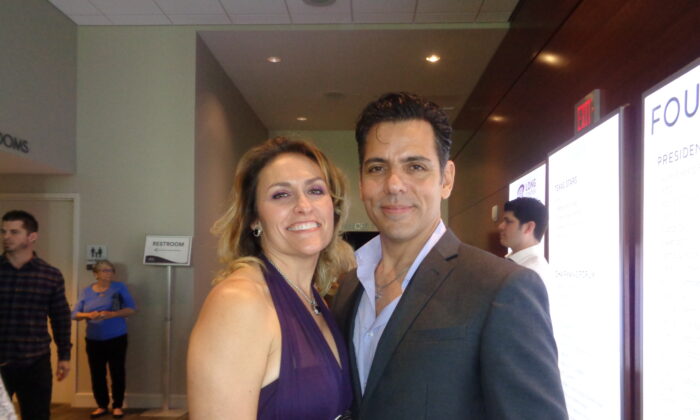 Jessica and Jose Saavedra-Revuelta, a married couple who work in the medical device industry, attended Shen Yun Performing Arts at he Long Center for the Performing Arts in Austin, Texas on Feb. 2, 2020. (Yawen Hung/The Epoch Times)

AUSTIN, Texas—Much of the world’s folk history is being lost to time and modern conveniences, but many are encouraging its preservation and revival. One dance company from New York is spearheading the rebirth of ancient Chinese culture, and a husband and wife who saw them in Austin felt that the work the group is doing is important, interesting, and an example for others to follow.

“I think that it’s something that’s needed obviously. Because I think whether it’s Chinese culture or European culture, I think every culture’s losing their heritage and I think that it’s important that we visit all that and bring our heritage back,” said Jose Saavedra-Revuelta, who works in the medical device industry.

Jose attended Shen Yun Performing Arts with his wife, Jessica, as an anniversary gift from her. The two wore beaming smiles as they described what they had seen on stage at the Long Center for the Performing Arts on Feb. 2, 2020, calling Shen Yun joyful, fantastic, beautiful, and impressive.

“It’s beautifully done,” said Jessica, who also works in the medical device industry. “I love the story [Shen Yun is] telling and the dancing is just very flowing and beautiful. And the colors and the stage production is right on point.”

A piece titled “Water Sleeves” was especially memorable for Jessica because of the exceptionally long, flowing silk sleeves worn by the female dancers that they throw, trail, and catch as they dance to breathtaking effect.

“I love the long-sleeve dance with all the pink colors, that was beautiful. All of [Shen Yun] is wonderful,” Jessica said.

Jessica added that of all the feelings the show evoked in her, joy is the overall impression she’ll leave with. “And also the story of that history is being covered up in China. We’re very lucky here in America because we can express, we can do the things that we want to do. And that story about [a woman] wanting to meditate, just freedom of expression is being covered up, so … that was interesting.”

The stories from modern-day China depict ongoing persecution of spiritual believers carried out by the Chinese Communist Party through a campaign of terror and violence. Shen Yun, whose mission is to revive China’s 5,000 years of traditional culture, cannot perform in China today since their artists, like the meditating woman Jessica mentioned, practice a traditional form of meditation known as Falun Dafa.

Many audience members like Jessica cite Shen Yun’s stories of good versus evil as among the most memorable for them. Some of these dances portray examples of how real people are responding to the repressive violence with compassion, forgiveness, and faith in the Creator.

Jessica’s husband was impressed by these stories, too, and also by the more ancient legends in Shen Yun.

“Oh, I think [Shen Yun] is fantastic,” Jose began. “I think the colors, the dancing, just the history behind everything is very interesting, is very impressionable,” he said.

“I like the variety of it. I think the whole history of it is very interesting, I love it all,” he added.

Ancient Chinese culture includes the belief that the Creator brought souls from heaven to become the people of earth, and that He will return again one day. Shen Yun includes this deeply spiritual legend from Chinese tradition, which Jose appreciated.

“I think it’s very interesting because it’s something I’ve always been interested in was how we came to this Earth … Yes, this is very fascinating for me, very interesting,” he said.

The experience of Shen Yun for Jose was multi-faceted, with the beauty of the dancing being but a complement to the depth of the stories, which he felt was its highest value.

“I think the stories that it tells alone was so interesting, and the presentation of the dancing, everything was just like the icing on a cake, it just adds more to it,” he said. “But I think the history alone is what’s so impressive.”