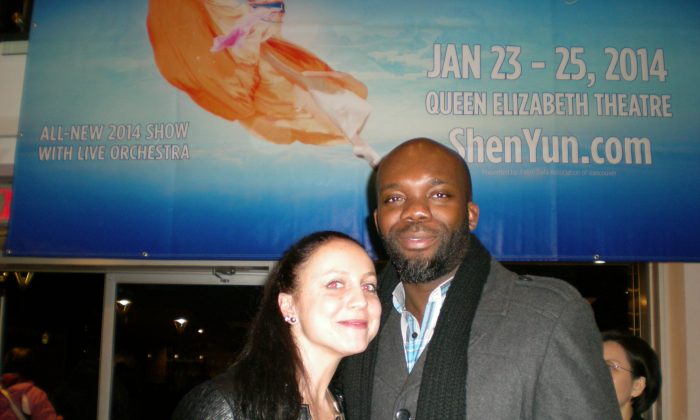 VANCOUVER—Hip hop dance instructor Koffi Noumedor needed only to travel to downtown Vancouver to see 5,000 years of Chinese culture and history on Saturday.

Mr. Noumedor is an expert in hip hop and House dance, which he teachers at Harbour Dance Centre in Vancouver. He is also versed in all sorts of street style dance and often gets called to adjudicate hip hop Competitions.

Social worker Melodie Zali attended the Shen Yun performance with Mr. Noumedor and was surprised to see how athletically demanding classical Chinese dance can be.

“We were so surprised that Chinese people in classical dance do acrobatics and jumps,” she said.

According to the Shen Yun website, classical Chinese dance is one of the most comprehensive dance systems in the world. In addition to rigourous training in the fundamentals, it also requires systematic training in movements, postures, and difficult jumping and tumbling techniques.

The mission of New York-based Shen Yun is to revive this classical art form, along with 5,000 years of divinely inspired Chinese culture.

Mr. Noumedor said the digital, moving backdrops featured in Shen Yun added excitement to the performance and helped him relate to the story-based dances.

“It added a better understanding of the story for me,” he said.

He was also impressed with the way the dancers, orchestra, and backdrops were coordinated to interact seamlessly. This split-second timing is required to create the illusion that the dancers can move in and out of the screen.

“All the synchronization was really cool,” said Mr. Noumedor.

According to the website, the landscapes projected onto the backdrops truly reflect China’s multifaceted geography, society, regions, and dynasties.