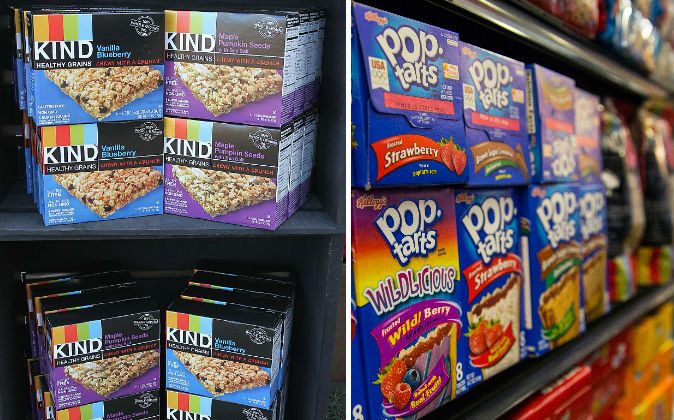 Healthy food—it seems like such a basic concept. But interpretations vary widely.

For example, the Kind company once claimed their bars made from fruit and nuts were “healthy,” but in 2015, the label came under attack. The U.S. Food and Drug Administration (FDA) sent the company a warning letter, demanding that it remove the word “healthy” from its website and packaging because the bars fell short of the official definition.

The red flag was fat content. Kind bars are primarily made of almonds, which makes for a snack that contains up to 13 grams of fat per serving—far above the three-gram limit the FDA allows food manufacturers to label as a “healthy” product.

The FDA also has set limits on sodium and cholesterol content, but puts no limit on sugar. Based on these criteria, low-fat Pop Tarts (which contain nearly four teaspoons of sugar per serving) can be considered “healthy,” but naturally fatty foods like salmon and avocados cannot.

The irony is not lost on Lauren Blake, a registered dietitian at The Ohio State University Wexner Medical Center. Blake says that although food manufacturers have the ability to meet the FDA’s “healthy” requirements, it doesn’t mean the product is good for people.

“They can make a product that’s low in calories, low in sugar, or low in fat, but at what cost? What makes up the actual product? Is it isolated soy? Artificial sugar? Artificial colors? That’s not healthy to me,” she said.

It turns out that many foods labeled as healthy aren’t. A study published last year in the Journal of the Academy of Nutrition and Dietetics found that food products with claims such as “low-fat,” “no fat,” or “reduced salt” often had a worse nutritional profile than their regular food and beverage counterparts.

Federal regulators’ current definition of healthy was created during the low-fat craze of the 1990s and reflects the scientific understanding of that time. However, the Kind bar debate has prompted the FDA to reconsider its interpretation of the word. In September 2016, the agency announced it had begun revamping its definition based on the updated nutrition science and dietary recommendations contained in the 2015–2020 Dietary Guidelines for Americans.

“Redefining ‘healthy’ is part of an overall plan to provide consumers with information and tools to enable them to easily and quickly make food choices consistent with public health recommendations and to encourage the development of healthier foods by the industry,” the FDA said in a statement.

10 Foods You May Think Are Healthy, but Aren’t

But some nutrition experts argue that any definition is likely to be misleading. In a blog post commenting on the FDA’s effort to redefine “healthy,” nutrition expert Marion Nestle of New York University says the process isn’t about semantics, but about marketing.

“You might think that any food minimally processed from the plant, tree, animal, bird, or fish would qualify. But ‘healthy’ is a marketing term for processed food products, not foods,” Nestle wrote.

Blake also warns her clients not to be blinded by the sales pitch.

“I don’t think it’s fair to use the word healthy when we’re talking about most manufactured food,” she said.

“Healthy” is a word that taps into the psychology of a consumer and suggests a sense of sacrifice: You could have chosen the regular Oreos but you went with the fat-free version instead. How responsible.

But studies suggests that making the “healthy” choice may actually contribute to overeating. A report published in the Journal of the Association for Consumer Research found that many of us believe healthy means less filling, so we eat more as a result.

In one phase of the study, three different groups were presented with popcorn labeled as either “healthy,” “unhealthy,” or “nutritious.” Subjects were asked to take as much popcorn they needed to satisfy their hunger. All the popcorn was the same, but those in the healthy group ate the most. Those in the nutritious group ate the least.

The suggestive power of a label may sound silly to your rational mind, but it may still have a subconscious effect.

The suggestive power of a label may sound silly to your rational mind, but it may still have a subconscious effect. Even the test subjects who disagreed on a questionnaire that healthy foods are less filling still ate more when presented with foods labeled as “healthy.”

Ancient cultures looked to the natural world as a model for good health. In the Chinese medical tradition, for example, optimal health was represented in the balance of the five elements: wood, fire, earth, metal, and water.

The vocabulary has changed, but the idea of health as a sense of balance has endured through modern times. According to the Constitution of the World Health Organization, “health is a state of complete physical, mental, and social well-being and not merely the absence of disease or infirmity.”

Americans are more interested in health than ever before, but a study published last year in the medical journal Mayo Clinic Proceedings found that less than 3 percent of Americans actually lead a healthy lifestyle.

Nearly 40 percent of subjects ate a healthy diet, but few could manage meeting all of the criteria: eating good food, not smoking, getting more than two hours of vigorous exercise a week, and maintaining a low body fat percentage—less than 20 percent for males and 30 percent for females. The body fat requirement is where most people fell short.

Robert Herbst, an 18-time world powerlifting champion, believes that “healthy” food labels suggest to consumers that they can simply eat their way to a healthy body, with no extra effort required.

“People are looking for an easy way to health where they do not have to work hard or sweat,” Herbst said in an email.

In addition to defining what “healthy” isn’t, the FDA’s interpretation also requires that a healthy product have some nutritional advantages—it must contain at least 10 percent of the recommended daily serving of vitamins A or C, calcium, iron, protein, or fiber. The updated definition promises to contain a longer list of these target nutrients.

But Blake believes that regulators could do a lot more to promote real health by focusing on other aspects of the food label. One of her suggestions is for labels to draw a clear distinction between naturally occurring carbohydrates (found in whole, unprocessed plant foods) and refined sugar (a favorite addition among food manufacturers). Both are technically carbohydrates, but their effect on the body can be quite different.

I think there should be more transparency with ingredients highlighting what we know, based on evidence, is detrimental to our health.
— Lauren Blake, dietitian, The Ohio State University Wexner Medical Center

“I think there should be more transparency with ingredients highlighting what we know, based on evidence, is detrimental to our health,” she said.

If Blake had her way, regulators would devote more of their attention to labels that identified chemicals, coloring, preservatives, and common allergens rather than making such a fuss about macronutrients (fat, protein, and carbohydrates).

The foods Blake advises her clients to eat typically don’t have any labels: fresh fruits and vegetables, lean protein, nuts, and seeds.

“When I am eating something that’s in a package, which inevitably happens, I like to look at the ingredients. If it has ingredients that I can’t recognize, I don’t know if that’s the healthiest thing for me, regardless of what the nutrition information says,” she said.

The key to healthy eating isn’t choosing “healthy” versions, but rather keeping all the junk to a minimum.

Given the culture we live in, it’s hard to avoid processed food entirely, but Blake warns that it should never be the bulk of our diet. The key to healthy eating isn’t choosing “healthy” versions, but rather keeping all the junk to a minimum.

“Let’s say you eat real, whole food during 90 percent of the week. And then you’re out with a friend on a weekend and you get a cookie,” Blake said. “Maybe it’s not the healthiest thing, but overall you’re still doing a great job, because it’s about the patterns of eating.”

The FDA’s public commenting period for the updated “healthy” label ends on April 26.