‘Heaven has its Angels’ and ‘Earth has Shen Yun,’ Says Congressional Staff Member 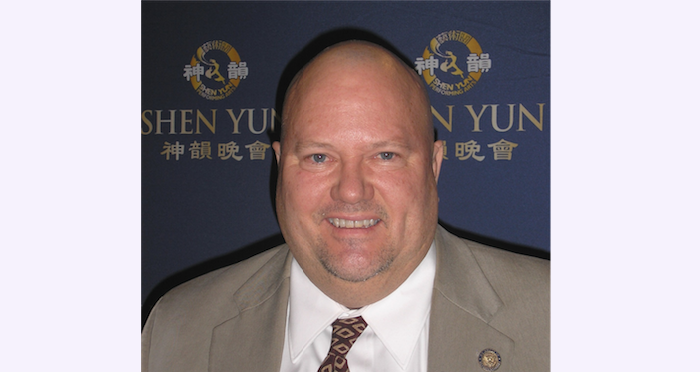 Lee Huff is a Constituent Services Representative for U.S. Representative Matt Salmon from Arizona and is a former business owner. Huff also served during Rep. Salmon’s first tenure in office as Deputy Chief of Staff of Administration. Like Rep. Salmon, Huff is fluent in Mandarin Chinese and lived abroad in Taiwan.

Shen Yun was born in 2006, when “a group of leading classical Chinese artists came together in New York with one wish: to revive the true, divinely inspired culture of China and share it with the world,” according to the company website.

“It’s just phenomenal, the feeling you get watching them,” said Mr. Huff of the performers. “It’s like being 5000 years old but not feeling a day over 20.”

Mr. Huff said he couldn’t even imagine the amount of time and effort that the dancers and other performers must have dedicated to create a performance so fluid, precise, and beautiful, especially with so many artists on the stage at the same time.

“You put your mind to it and you can do almost anything you want to, and tonight is proof of that,” he said.

“Throughout history almost every culture looked toward the divine for inspiration,” states the Shen Yun website. “Art was meant to uplift, bringing joy to both the people who created and experienced it. It is this principle that drives Shen Yun performers and their art.”

Mr. Huff said he thought the whole performance was simply angelic in its grace and beauty, and he felt fortunate to be able to attend.

Mr. Huff said those who have not seen the Shen Yun “must see it,” saying it was one of the most exciting shows he’s ever seen.

“I kind of felt like this must be what heaven is like,” he said. “People say you can’t experience heaven on Earth—well, tonight we did.”

Shen Yun is ‘A Spectacular Experience’

“It was amazing,” said Dr. Lynton. “It was my first time seeing it. Very spectacular, beautiful colors, wonderful story, and you get to know more about the Chinese culture.”

Dr. Lynton has also toured Europe as an ice dancer with Holiday on Ice and now teaches ballroom dancing.

Dr. Lynton said the choreography was excellent, at times keeping her on the edge of her seat, and at other times really warming her heart.

She was touched by the artists’ embodiment of virtues such as compassion and kindness and simply helping other people through the stories in the dances.

She said she also felt the qualities of the Golden Rule being demonstrated in the Shen Yun performance, which is doing things to others that you would like to have done to you.

“The golden rule is something that we can all live by, and I think that comes out very clearly in the dancing, in the performance,” she added.

She encouraged everyone to see Shen Yun, saying it is “absolutely spectacular.”

“It will teach you about some aspects of Chinese culture, dancing, you’ll be very entertained, and it’s very spiritual as well,” she said.