There’s No Mild in Myocarditis 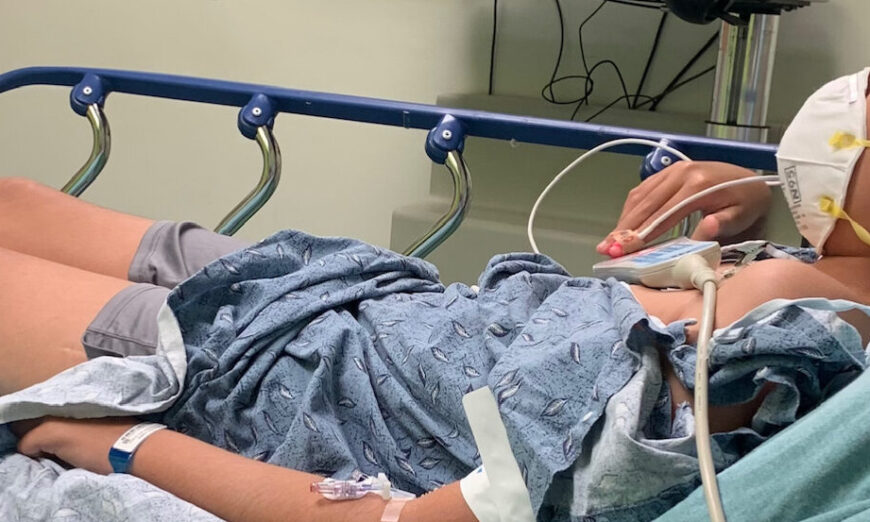 Aidan in the hospital on June 12, 2021, two days after his second Pfizer vaccine. (Photo courtesy of Emily Jo)

Emily Jo and her family, who live just outside of Atlanta, were as careful as they could be to avoid getting COVID-19. They social distanced, always wore masks, opted for virtual learning, and were very excited to get the vaccine as soon as it was available. Jo teaches English as a second language, science, and math classes online, mostly to students in China. Her husband is an engineer and an inventor. Jo, who asked The Epoch Times to not publish her last name, was aware that the mRNA vaccine against COVID-19 could cause side effects, but she believed the benefits outweighed the risks. She felt strongly that getting vaccinated was the best and safest choice.

With an undergraduate degree in microbiology and biochemistry, Jo thought that she had done her research. The Centers for Disease Control and Prevention (CDC), the Food and Drug Administration (FDA), and her son’s pediatrician all recommended the vaccine, and she trusted their judgment. So Jo took her 14-year-old son Aidan to get the first dose on May 12, as soon as it was approved for younger teens. And she posted about how relieved and happy she was to get the Pfizer vaccine for him on her Twitter account, which is @eekymom.

Then, almost a month later, Aidan received the second dose. On June 10, Aidan, an active, curious, straight-A student who wants to be a doctor, and his mother went to the drive-through vaccine clinic at the Jim R. Miller Park. Jo was handed some paperwork to sign before it was their turn but, she said, it all happened very fast and no one explained the risks, benefits, or options to them.

“It was kind of like an assembly line,” she said “It definitely wasn’t personalized care.”

Two days later, Aidan, who has asthma, came into his parents’ bedroom at 4:30 a.m.

“My chest hurts,” he whispered to his mom. He was also having difficulty breathing. Aidan had actually been lying in pain for hours waiting for his mom to wake up because he didn’t want to bother her. Jo still feels bad about that.

They went to the emergency room. The first thing she was asked by the triage nurse was if Aidan had been recently vaccinated. In fact, every doctor she spoke to at Children’s Healthcare of Atlanta, a hospital that specializes in pediatrics, confirmed that her son was having a bad reaction to the second dose of the Pfizer vaccine.

“They knew,” Jo said. “They didn’t try to attribute it to anything else.”

Testing revealed that Aidan had elevated troponin levels. Troponin is a protein found in the heart that shouldn’t normally be in the bloodstream. When it is, it’s an indication of damage to the heart, according to the Mount Sinai Health System. Aidan also had an abnormal electrocardiogram, the test which measures the heart’s electrical activity.

He was swiftly admitted to a room on the acute cardiac floor, where he was hooked up to telemetry to monitor his heart. That first night, his troponin levels quadrupled, his mom said. Aidan was diagnosed with vaccine-induced myocarditis. He stayed in the hospital for four days, until his troponin levels stabilized.

“He can’t do physical activity,” Jo said. “He’s a freshman at a new school, and he has to sit on the sidelines.”

She thought he was getting better, but more than a month after his ordeal, Aidan is still exhausted. Recently, the family went to the lake, and just floating in the water on a noodle and being paddled around by his cousins was too much.

“People are led to believe with myocarditis that you’re better in a few days. That’s not the case,” Jo says. “There’s no mild in myocarditis.”

According to the CDC, since April, there has been an increase in reports of both myocarditis (heart inflammation) and pericarditis (inflammation of the tissue surrounding the heart) after COVID-19 vaccination with the Pfizer-BioNTech and Moderna vaccines, particularly in adolescents and young adults, but not after the Johnson & Johnson vaccine.

The CDC has stated that these cases are occurring mostly in young men, ages 16 and older, with a typical onset of several days post-vaccination. Like with Aidan, cases are more common following the second dose of the mRNA vaccines. On their website, the CDC recommends that health care providers report any cases of myocarditis to the Vaccine Adverse Events Reporting System and that doctors consider myocarditis and pericarditis in teens and young adults complaining of chest pain, shortness of breath, or heart palpitations.

The signal was strong enough that, on June 25, the FDA announced a change to Fact Sheet for Healthcare Providers Administering Vaccine, as well as a change to information given to patients. The new fact sheets now include a warning about myocarditis and pericarditis.

However, after reviewing the risk of heart inflammation post-vaccination, the World Health Organization’s Global Advisory Committee on Vaccine Safety (GAVCVS) announced on July 9 that, despite a “strong signal of myocarditis/pericarditis” the benefits of vaccination outweigh the risks.

The WHO doesn’t recommend vaccination for children under 18 at this time.

“Children and adolescents tend to have milder disease compared to adults,” the WHO’s website reads. “More evidence is needed on the use of the different COVID-19 vaccines in children to be able to make general recommendations.”

At the same time, the CDC continues to recommend vaccination for every child older than 12 years of age.

The Vaccine Adverse Events Reporting System (VAERS) is a passive surveillance system open to the public. The CDC has pointed out that “VAERS is not designed to determine if a vaccine caused a health problem, but is especially useful for detecting unusual or unexpected patterns of adverse event reporting that might indicate a problem with a vaccine.”

VAERS has seen an unprecedented number of reported injuries post-COVID-19 vaccination. The Epoch Times interviewed one emergency room doctor in Arizona, speaking on background, who said he’s seeing two or three patients coming into the emergency room each day with vaccine-related injuries, but has never filed a single report, and prior to March 2020, he had never heard of VAERS.

Health care professionals aren’t paid to file such reports, the system is often down, and it can take up to an hour to file a report. Despite this, as of Aug. 6, there have been 595,620 domestic and nondomestic reports of adverse events following receipt of COVID-19 vaccines as of Aug. 13. This includes 4,861 reports of myocarditis/pericarditis, 5,882 reports of heart attacks, and 13,068 deaths.

But despite those unusually high numbers, Dr. Bose Ravenel, a retired integrative medical doctor based in North Carolina with 49 years of experience practicing pediatrics, believes that the real number of adverse events in tweens and teens, particularly of myocarditis and pericarditis, is grossly underreported.

“The number of young people having heart events is much higher than what’s being reported, and the severity and duration of these events is being downplayed,” Ravenel said.

Luke Yamaguchi, a functional nutritionist based in Albany, Oregon, has been following the weekly VAERS COVID-19 updates and posting them on Facebook.

“Deaths following COVID vaccination reported to VAERS now exceed the total number of deaths reported for all other vaccines combined over the past 30 years,” Yamaguchi said. “People will say VAERS can’t prove causation, and that’s true. But this is one of the biggest safety signals we’ve ever seen.”

According to researchers at the University of London, 50 percent of these reports occurred within 48 hours of the vaccination, and 80 percent within one week. This strongly suggests a causal relationship, according to Ravenel.

That’s what happened to Jacob Clynick, age 13, a student at Zilwaukee Elementary School in Saginaw, Michigan. Clynick was vaccinated with the first dose of the Pfizer vaccine in May and received his second dose at Walgreens on June 12. Clynick died just four days later, on June 16.

“The initial autopsy results (done Friday) were that his heart was enlarged and there was some fluid surrounding it,” Burages wrote on Twitter.

Her tweet, which has since been removed, was screen captured by The Defender.

Ravenel is so concerned about heart damage and other potential adverse effects post-vaccination that he argues adolescents shouldn’t receive the vaccine.

“The risk of some vaccine injury for children is substantially higher than any benefit,” Ravenel said. “In the case of the mRNA vaccines, the risk is unknown. Period. That’s not debatable. The data on which the EUA [Emergency Use Authorization] was granted was obtained over only sixty days. We don’t know the long-term risks.”

“The risk of a bad outcome with COVID [in teens and young adults] is very low, so risk of vaccination is likely greater,” Orient wrote in an email. “We do not and cannot know about the long-term effects: autoimmune diseases, infertility, heart failure, cancer, antibody-enhanced disease.”

Like Ravenel, Orient is particularly concerned about the long-term outcomes for young people who experience post-vaccination heart inflammation, including fibrosis (scarring of the heart tissue), heart failure, and the need for a heart transplant.

“It may be impossible to prove causality. … Some reactions may be too mild to produce symptoms yet lead to long-term damage,” Orient said.

Dr. Charles Penick, an integrative family physician based in Los Angeles also argues that the vaccine may not be necessary for tweens and teens and may even end up doing more harm than good for adults as well.

“My concern is that instead of reducing the number of coronavirus cases, the COVID vaccine may end up making things worse,” Penick said.

Emily Jo said her husband and she had no complications from the Pfizer vaccine and are both grateful that they got it. But, despite having insurance, her family has thousands of dollars in medical bills, her son is unable to do strenuous physical activity, and she’s worried about the possible long-term consequences of myocarditis. At the same time, her niece and nephew, as well as her neighbors’ children, who are all around the same age as Aidan, got such mild cases of COVID-19 that all they had were the sniffles.

“What I know is that my kid got sick from this vaccine,” Jo says. “I don’t know how sick he would’ve gotten from the virus, but I know this gave him myocarditis. I feel like I should’ve done more due diligence, not be one of the first to sign him up. The guilt is eating me alive.”