The Benefits of Red and Near-Infrared Light Therapy 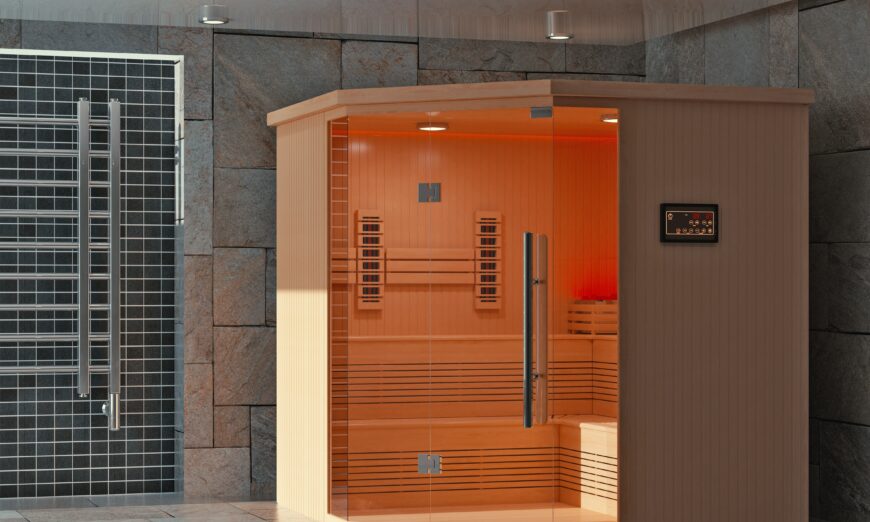 Infrared saunas are one way to rejuvenate our cells when sunlight is not available.(doomu/Shutterstock)

In this interview, Ari Whitten, author of “The Ultimate Guide to Red Light Therapy,” reviews the mechanics and basic benefits of red light and infrared light. Whitten, who has a degree in kinesiology, exercise science, and movement science, has studied natural health, fitness, and nutrition for more than 20 years.

Red and near-infrared light are, of course, a subset of natural sunlight, which actually acts and has value as a nutrient. Red light and near-infrared light therapies are ways to get some of those benefits. It may be particularly valuable and beneficial for people who aren’t getting enough natural sunlight exposure, and that’s a majority of people. As noted by Whitten:

“There’s a mountain of literature showing that regular sun exposure is one of the most powerful and important things you can do for your health and to prevent disease. Simultaneously, we have a general public that is afraid of sunlight.

“Even the subject of melanoma is rife with misunderstanding because there is research showing, mechanistically, that if you expose cells in a Petri dish to lots of UV light, you can absolutely induce DNA damage and induce cancer formation.

“You can take rats and expose them to tons of isolated UV light and induce cancer. You can even find an association between sun burns and increased melanoma risk.

“Despite all of those things, it is also the case that when you compare people with regular sun exposure to people with much less sun exposure, they do not have higher rates of melanoma.

One of the reasons for this is because indoor workers are exposed to fluorescent lighting, which is loaded with dirty electricity or high-voltage transients that have a biophysical and psychological effect on people.

In the span of a few generations, people have lost the essential nourishment of the sun and have had their environments saturated with microwave-emitting wireless devices.

So, not only do people not get sunlight exposure, but they also get harmful EMF exposure.

A side effect of this change is that people have lost their normal biochemical reaction to the sun. Intermittent exposure—occasional exposure to sunlight followed by many days or weeks of little to no exposure—tends to be more problematic than regular, frequent sun exposure, as you’re more likely to burn and cause DNA damage in your skin.

Regular exposure, on the other hand, ameliorates this risk, as it engages innate adaptive systems in your skin, your melanin in particular, that are explicitly designed to prevent DNA damage from UV light exposure.

“So, we have this system built into our bodies that’s designed to allow us to get all these benefits of sunlight without the DNA damage and the increased skin cancer risk,” Whitten says.”Framing light as a nutrient is the best way of understanding this.

“Vitamin D is obviously the most well-known one that regulates over 2,000 genes related to immune health, musculoskeletal health and many other things. But there are many other mechanisms [as well].”

As explained by Whitten, there are specific bioactive wavelengths, and they work through different mechanisms. One mechanism is through your eyes, which is why you’re typically better off not wearing sunglasses on a regular basis. When you’re outdoors on a sunny day, without sunglasses, blue and green wavelengths enter your eyeballs and feed through nerves into the circadian clock in your brain.

Your circadian clock, in turn, regulates a variety of bodily systems, from neurotransmitters involved in mood regulation to hormones involved in immune function. A dysregulated circadian rhythm has been linked to dozens of diseases, including cancer, cardiovascular disease, and neurological diseases.

“I consider disrupted circadian rhythm and poor sleep to be probably the single most common cause of low energy levels and fatigue,” Whitten says. Fatigue is the key focus of his Energy Blueprint brand, and in the interview, he reviews some of the other root causes for poor energy and fatigue, aside from light exposure.

In summary, your body’s resilience, i.e., your ability to tolerate environmental stressors, is directly dependent on the robustness, both in terms of quantity and quality, of your mitochondria. When your resilience threshold is exceeded, disease processes are activated, and fatigue can be viewed as the initial universal symptom prior to overt disease. For more information about this side topic, be sure to listen to the interview or read through the transcript.

Modern-day red light and near-infrared light therapy is an extension of the original heliotherapy or sun-based therapy, which has a long and rich history of use for a number of diseases, including tuberculosis.

Over the past few decades, more than 5,000 studies have been published about red and near-infrared light therapy, aka photobiomodulation, for a wide range of ailments, from combating wrinkles and cellulite to hair regrowth, sports performance, accelerated injury recovery, increased strength, and much more.

More Is Not Necessarily Better

A common fallacy is that if something is beneficial, then the more the better. But this can be a hazardous assumption. As explained by Whitten, there is a biphasic dose response to red and near-infrared light therapy. Basically, you need to do enough of it to experience its effects, but if you overdo it, you can cause negative effects. So, it’s all about finding the sweet spot.

That said, as a general rule, your risk of exceeding the beneficial dose with light therapy is lower than it is with something like exercise. Meaning, it’s much easier to overdo exercise and end up with tissue damage from that than it is to overdo red and near-infrared light therapy.

That said, Whitten warns that there are some people who have a unique reaction.

“What I’ve seen in my group of about 10,000 people that have gone through my program, many people with severe chronic fatigue or debilitating chronic fatigue syndrome, is there seems to be a small subset of people, I’m guessing somewhere between 1 percent and 5 percent of people, that have a really negative reaction to it, even at really, really small doses, let’s say two minutes of red light therapy …

“So, there seems to be this small subset of people that is really hypersensitive and prone to negative effects. Generally, in my experience, those people are usually in very poor health overall.”

One potential reason for this is because, like exercise and fasting, light therapy is a type of hormetic stress, which works in part by transiently increasing free radicals or reactive oxygen species.

People with extremely poor mitochondrial health will have a very low resilience threshold, so their capacity to tolerate that burst of reactive oxygen species will be low. At that point, they’re simply creating damage, and their bodies don’t have the resilience to effectively recover from it.

As noted by Whitten, there are several accepted mechanisms of action, and then there are more speculative mechanisms. One of the most well-known mechanisms is cytochrome c oxidase, a photoreceptor on your mitochondria that literally captures photons of red and near-infrared light.

The most effective wavelengths that activate this system are in the 600 to 700 nanometer range, and the 800 to 1,000 nanometers range. In response to those light photons, your mitochondria will produce energy more efficiently. “In general, cells—whether it’s skin cells, your thyroid gland, your muscle cells—they work better if mitochondria are producing more energy,” Whitten explains.

This is one general principle of how light therapy can help heal such a diverse range of tissues and conditions. Another mechanism is related to the benefits of hormesis and the transient spike in reactive oxygen species. That burst of reactive oxygen species creates a cascade of signaling effects that stimulate the NRF2 pathway and heat shock proteins, for example.

As a result, your intracellular antioxidant response system is strengthened and your mitochondria are stimulated to grow bigger and stronger. It also stimulates mitochondrial biogenesis, the creation of new mitochondria. Ultimately, all of this increases your resistance to a broad range of environmental stressors.

“If hormesis is dosed properly, it should not create lasting harm. It should stress the system temporarily and stimulate adaptive mechanisms that ultimately make the whole system more resistant to any kind of harm,” Whitten says. “But you shouldn’t be doing hormesis at a dose that is actually creating damage.”

A third mechanism of action involves retrograde signaling and the modulation of gene expression. Your mitochondria play a key role here as well. As explained by Whitten:

“Mitochondria are not just mindless energy generators, but they are also environmental sensors that pick up on what’s going on in the environment. Are there toxins present, is there a pathogen present? Is there increased inflammatory cells present?

“They’re picking up on these signals. They’re also picking up on light signals … and reactive oxygen species from hormetic stress. And they’re relaying these signals back to the mitochondria in a way that modulates gene expression.”

There’s a specific set of genes that are expressed in response to red and near-infrared light therapy. In summary, it activates genes involved in cell repair, cell regeneration, and cellular growth, depending on the tissue.

“So, you’re getting these local effects in those specific tissues that upregulates genes involved in cell healing, growth and repair,” Whitten says.

Exposure to UVA, red light, and near-infrared light also increases the release of nitric oxide (NO) which, while being a free radical, also has many metabolic benefits in optimal concentrations. Many of the benefits of sun exposure can’t be explained solely through the production of vitamin D, and the influence of NO may be part of the answer.

There’s also a speculative line of research suggesting that red and near-infrared light interact with chlorophyll metabolites in a way that helps recycle ubiquinol from ubiquinone (the reduced version of CoQ10).

Those specific wavelengths of light may help recycle reduced CoQ10, which also enhances energy production. “So, there may be this really interesting synergy between your diet and red and near-infrared light therapy were consuming more chlorophyll-rich compounds may enhance this effect,” Whitten says.

To learn more, be sure to pick up a copy of Whitten’s book, “The Ultimate Guide to Red Light Therapy.” On his website, TheEnergyBlueprint.com, you can also access his Energy Blueprint podcast, articles, programs, and testimonials.

In his book, Whitten provides specific recommendations for red and near-infrared therapeutic devices, which can save you a lot of research time if you’re considering this kind of therapy. As noted by Whitten: