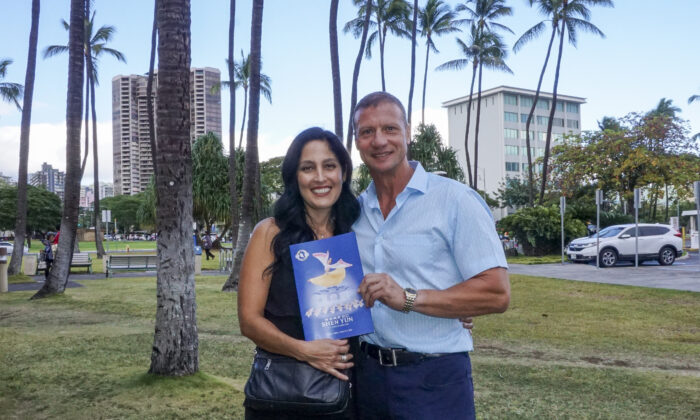 Army Major Alexei Fainblout and his wife, Jodi, at the Shen Yun performance in Honolulu on March 27, 2022. (Nancy Ma/ The Epoch Times)

U.S. Army Major Alexei Fainblout and his wife Jodi Fainblout attended the performance on the afternoon of March 27.

On what makes Shen Yun a beautiful experience, Major Fainblout said: “besides the fact that it’s a flawlessly executed performance, it’s also that the messaging is great. It’s one of respecting tradition, and faith, compassion, and how that translates to modern times.”

The fact that Shen Yun tours the globe demonstrating the ancient values of truthfulness, compassion, and forbearance brought him great hope.

“I think it is a huge impact on taking this message around the world,” he said. “I think it brings people on the same page that there are some universal values that are important to all people. And if we adhere to those values, I think it will be less pain and suffering in the world.”

Shen Yun was the first theater performance the couple saw since the pandemic.

Now that “people are coming out of their caves [after] COVID,” he said, “this is a great step to start bringing people out and bringing back that spirit of unity.”

To anyone who hasn’t seen Shen Yun yet, he described it as a “greatly technically executed show with a good enlightened message.”

Janelle Castillero, operations assistant commanding officer at U.S. Army Pacific at Fort Shafter, brought her daughters out to see Shen Yun on the same evening. She said the girls were glued to the action onstage.

“The colors were eye-catching. The storylines were beautiful,” Castillero said. “The music, the dancing was spectacular to me. I could never catch a dull moment.”

At the show’s end, she wished she could watch it again.

“I really wish it would be coming back because there is so much detail and traditions behind it,” she said. “The details, the storylines, how it was to how it is now. … It made you realize how fast the culture and tradition kind of fade away, but kind of brought back at the same time.”

This is the core of Shen Yun’s mission: to preserve and revive the 5,000 years of heritage that is at risk of being lost forever. To Chinese people, faith-based traditions are the core of their identity and the essence of a meaningful life.

“I think it’s extremely important because tradition is fading away with how the generations are not seen. And normally these days, the traditional buildings are getting replaced by modernized technology and architecture and not realizing how and where they come from,” Castillero said.

Reporting by NTD and Nancy Ma.