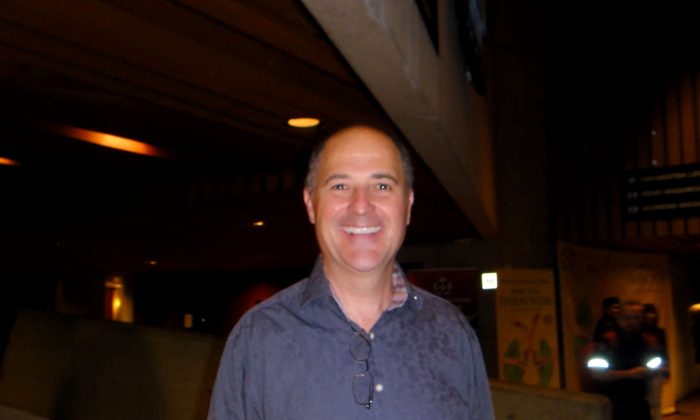 HAMILTON, Canada—Arts lovers in Hamilton bid farewell to Shen Yun Performing Arts on May 11, as the classical Chinese music and dance company performed its last Canadian show of the year—to glowing reviews.

For opera singer Nick Groenewegen it was a window to a new history and a new people.

“It was very interesting. It was enlightening and cultural,” said Mr. Groenewegen, who attended the performance at Hamilton Place Theatre.

“The dancing was beautiful,” he said.

He was particularly moved by the erhu, a traditional Chinese instrument featured in the performance.

“I loved it. Oh, I loved it. It was the one spot where I actually closed my eyes just to listen to the exquisite sound.”

The show left him feeling enlightened, he said. “My horizon has been broadened.”

Earl Wells, a country music songwriter, and Leah Troisi, who works in administration at a hospital attended the performance the night before.

“I’m not a big theatrical person usually, but I brought my wife here for her birthday and she loved it. I had a great time,” said Mr. Wells.

“The dancing was phenomenal. The timing was right on,” he said.

His wife shared his enthusiasm.

“One of the best birthday presents ever,” she said.

“The music was very full. A lot of melody—the different instruments blended together really well. It was an amazing sound,” he said.

Ms. Troisi said she had wanted to see Shen Yun since it first came to Hamilton seven years ago. “Finally made it,” she said.

‘It really touched my heart’

For yoga instructor Earleen Dickens, the experience was one-of-a-kind.

“It was amazing. The colours, the people, and the dancing. It was like nothing I’ve ever experienced before,” she said.

The depth and spirituality of traditional Chinese culture, which was guided by Buddhism, Daoism, and Confucianism for thousands of years, resonated with Ms. Dickens.

“It really touched my heart and it really opened up—I could feel a lot of things inside me opening up,” she said. “Very spiritual.”

“I could see that in their performances and the truth that they were bringing out was just so pure, like compassion and kindness and love. It was amazing. The stories were really, really from the heart.”

“They were awesome. They were beautiful, too. And the tenor—amazing voice, amazing voice. And the words to the songs he was singing really, really touched the heart.”

Lisa Dupuis attended the opening night performance on May 10 and said it was incredible.

“I got goose bumps right from the first act. It was inspiring. It was really, really inspiring,” she said.

She said she really enjoyed the performance and warmly praised the dancers.

“The dancers were beautiful, they were so elegant. All of them, they were all beautiful. It was beautiful, it was pretty, it was inspiring, it was breathtaking.”

She said it made an impact and she felt it deeply.

“Spiritual, right in my soul. More energy. Made me feel more energetic.”

She said the final dance was uplifting.