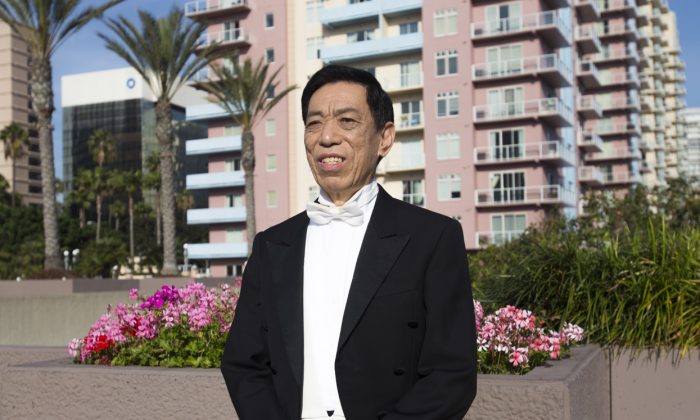 LONG BEACH, Calif.—One of China’s most celebrated tenors of recent decades, now 72-year-old Guan Guimin joined Shen Yun Performing Arts in 2006 and has been touring around the world since. While on tour in Long Beach, Calif. on March 19, Mr. Guan talked about his singing and the profound meaning behind Shen Yun performances.

Currently, Shen Yun is the only company in the world that masters the authentic bel canto, a nearly-lost vocal method. “Almost no one of my age can sing anymore. But since I studied under Shen Yun’s artistic director, learning the world’s most traditional form of bel canto, I can still sing and my voice is still young,” Mr. Guan said.

A Journey to the Divine World

The title of his song is “I sing to bring you hope,” Mr. Guan explains. “What I want to tell the audience is that human beings are from the heavens, and that watching Shen Yun is equivalent to having a glimpse of heaven. The outfits of the heavenly guards, the costumes of the heavenly fairies, were all made according to how it is in heaven. Exactly the same! The scenery in heaven is like this. I am not exaggerating.

People now spend a fortune to go to Mars. What they see are still things in this dimension. They cannot see the world where divine beings live. Shen Yun can take people on a journey to the divine world.”

The Creator Has Arrived

“For example, back in China’s Yuan Dynasty, after Marco Polo visited China, he went back to Italy and told the people that he saw a splendid city in the East. Many people did not believe Marco Polo and threw him in jail. The situation is similar now. We don’t force people to believe, but some will.”

“The Creator has arrived. He is here to save people. His words will elevate people’s moral standards. If humans have no morals, then they are worse than animals. What sets humans apart and makes humans noble is their moral standard. Our performance is to elevate morality in today’s world, not just Chinese people, but everyone on earth.”

Mr. Guan wishes everyone could have a chance to watch Shen Yun. “If people watch the show, their hearts and minds will be cleansed,” he said.

Guimin Guan was named a “National First-Class Performer” by China’s Ministry of Culture, and later honored by the Foreign Ministry as an “Outstanding Professional and Contributor.” Mr. Guan has recorded soundtracks for over 50 movies and television shows, and is the recipient of numerous accolades.

Guan’s career was interrupted by cirrhosis. Fortunately, he was able to return to singing after he started practicing Falun Dafa, a mind-body spiritual discipline rooted in traditional culture. However, because he practices Falun Dafa, Mr. Guan cannot return to China, where Falun Dafa practitioners are being persecuted.

“I still have many fans in China. I now sing to awaken people’s conscience. I consider this very meaningful.”

Mr. Guan believes that one day he will be able to return to China.

Mr. Guan has served as an adjudicator for many national-level vocal competitions in China, and in 2007 and 2008 was chief adjudicator for New Tang Dynasty Television’s first and second International Chinese Vocal Competitions.