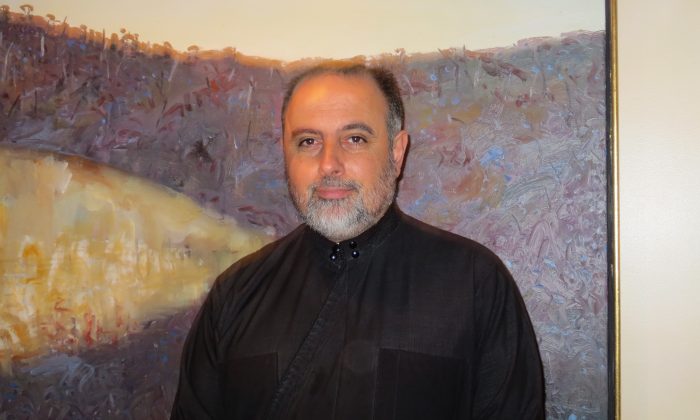 Greek Orthodox Bishop Iakovos was at the performance with friends.

He has a friend who had seen Shen Yun before and when he heard they were in Melbourne again his friend encouraged him to go.

Shen Yun is based in upstate New York and according to its website, “A Shen Yun performance features the world’s foremost classically trained dancers, a unique orchestra blending East and West, and dazzling animated backdrops—together creating one spectacular performance.”

“Very much amazed! Mesmerised by the beauty, the richness!” he said.

“Through the Universal language of music and dance, Shen Yun weaves a wondrous tapestry of heavenly realms, ancient legends, and modern heroic tales, taking you on a journey through 5,000 years of Chinese culture. Its stunning beauty and tremendous energy leave audiences uplifted and inspired,” explains the website.

He said, “The passion that was expressed in the colour, in the dance, the expressiveness in all of the production—the music!”

The Shen Yun website explains, “Over its past 60 years of rule, the communist regime has treated traditional Chinese values, centered on the idea of harmony between heaven and earth, as a threat to its existence. And in its systematic campaigns like the Cultural Revolution, it has uprooted traditional beliefs and destroyed ancient treasures, bringing traditional civilization to the brink of extinction.

“But through breathtaking music and dance, Shen Yun is bringing back this glorious culture.”

Bishop Iakovos was particularly moved by The Steadfast Lotus, a mimi-drama depicting present day China where a mother and daughter are persecuted for practicing the peaceful meditation practice of Falun Dafa.

He said, “The show is very moving. Very beautiful and expressive. But a very powerful story is being told, I think that is very important. We as fellow Christians, as Orthodox Greeks, we can empathise with people who are under persecution … this is what’s expressed through the theatre production as well. I was quite amazed.

“I hope that this show makes all the audience here and interstate, more aware of the plight of those who suffer.

“We feel the pain, the suffering, and the injustice.”

He felt Shen Yun had a very important message to share with the world.

He said Shen Yun was “very creative and courageous to put on this performance outside of China and to share this message with everyone.

“We believe as Christians, that it is every human person’s right to express their freedom of religion, to have their faith, and it’s good to see that it’s so common—the relationship with the divine.”

Bishop Iakovos was deeply touched by Shen Yun he felt it brought “the values of peace, compassion, solidarity, freedom” to the world.

He said he will happily recommend Shen Yun to many people and would tell them Shen Yun “is very worthwhile to see. I am here today on the recommendation of someone else who saw the show.”