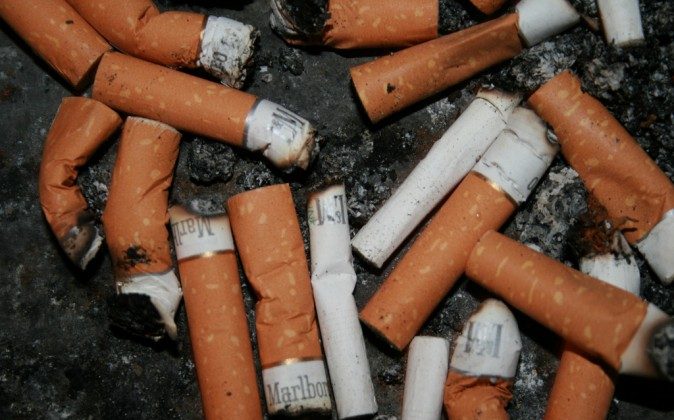 Alzheimer’s disease, a severe form of dementia, affects an estimated 5.2 million Americans, according to 2013 statistics. Approximately 7.7 million new cases of dementia are identified every year—which amounts to one new case every four seconds.

One in nine seniors over the age of 65 has Alzheimer’s, and the disease is now thought to be the third leading cause of death in the US, right behind heart disease and cancer.

While you cannot change your age and family history, there are modifiable lifestyle factors you can act upon to effectively reduce your risk for developing this tragic disease.

These modifiable risk factors include things like diet, physical activity, obesity, cognitive activity, and tobacco use. Recent research indicates that tobacco use may play a significant role in Alzheimer’s disease.

In 2014, the World Health Organization (WHO) published a report entitled “Tobacco Use & Dementia,” based on a comprehensive scientific review of tobacco use, exposure to secondhand smoke, and incidence rates for all types of dementia, including Alzheimer’s.

The report found that smokers have a 45 percent higher risk of developing dementia than non-smokers, and concluded that 14 percent of all Alzheimer’s cases worldwide may potentially be attributed to smoking.

Smoking is thought to cause dementia by the same biological mechanisms as its contribution to coronary artery disease, cerebrovascular disease, and stroke, namely by promoting the following three pathological processes:

For those who have a past history of smoking but do not currently smoke, the risk is less predictable, which suggests that smoking cessation later in life is beneficial and may reduce your dementia risk, as well as lowering your overall mortality.

Another study found smokers over age 65 who quit smoking might reduce their risk of dying from heart-related problems to that of a non-smoker within just eight years.

Your Risks from Secondhand Smoke Are Almost as High

A link between secondhand smoke and dementia is very likely, although studies are limited. According to the WHO:

The cardiovascular effects of secondhand smoke are nearly as great as for smoking, and operate through essentially the same biological mechanisms…”

The report cites six studies that all suggest exposure to secondhand smoke increases your risk for Alzheimer’s disease and other types of dementia. The risk appears to be “dose-dependent”—related to the frequency and duration of exposure. Even less is known about smokeless tobacco use and dementia risk. The WHO scientists state:

It should also be noted that secondhand smoke is dangerous to the health of your pets. Animals can develop lung damage and certain kinds of cancers from exposure to smoke, residual chemicals left behind by cigarettes, and from toxins that cling to a smoker’s hands and clothing. Studies show that secondhand smoke may double your cat’s risk for lymphoma.

Is Alzheimer’s Disease Really Another Type of Diabetes?

A growing body of research suggests there’s a major connection between your diet and your risk of developing Alzheimer’s disease, via similar pathways that cause type 2 diabetes, as explained by Dr. Perlmutter in the interview above. If you are diabetic, your risk of Alzheimer’s is TWICE that of someone with optimal metabolic function.

Even if you are perfectly healthy, excess sugar and other carbohydrates can disrupt your brain function. Over the long term, sugar can contribute to the shrinking of your hippocampus, which is a hallmark symptom of Alzheimer’s disease.

This connection between diet and brain function is so profound that Alzheimer’s disease was tentatively dubbed “type 3 diabetes” in early 2005, when researchers discovered that in addition to your pancreas, your brain also produces insulin, and this brain insulin is necessary for the survival of your brain cells.

Contrary to popular belief, your brain does not require glucose and actually functions better burning alternative fuels, especially ketones, which your body produces in response to digesting healthy fats. According to some experts, such as Dr. Ron Rosedale, Alzheimer’s and other brain disorders may in large part be caused by the constant burning of glucose for fuel by your brain.

There is strong evidence that overconsumption of carbohydrates and underconsumption of healthy fats are central to the Alzheimer’s epidemic. It is conceivable that lowering glucose levels in older people may have a positive influence on cognition, even if they’re within the “normal” range.

New Study: Aspartame May Play a Role in Alzheimer’s

Studies are beginning to confirm lingering suspicions that aspartame may play a role in Alzheimer’s. The key mechanism of harm appears to be methanol toxicity—a much-ignored problem associated with this artificial sweetener in particular. In recent research, methanol-fed mice displayed partial “Alzheimer’s disease-like symptoms,” and rhesus monkeys fed methanol developed persistent pathological changes related to the development of Alzheimer’s.

Humans are the only mammals who are NOT equipped with a protective biological mechanism that breaks down methanol into harmless formic acid. This is why animal testing of aspartame does not fully apply to humans. Since there is no conventional cure, the issue of prevention is absolutely critical if you want to avoid becoming an Alzheimer’s statistic. The remainder of this article will cover diet and lifestyle strategies for optimizing brain health, as well as tips for increasing your success in quitting smoking.

Keeping your brain healthy and preventing the pathological changes that pave the way to dementia begins with optimizing your diet. Several important principles are outlined below, and more comprehensive information is provided in my free Optimized Nutrition Plan.

Besides diet, there are a number of other lifestyle factors that can contribute to or impede neurological health. The following strategies are therefore also important for any Alzheimer’s prevention plan:

III. Other Natural Treatments for Your Anti-Alzheimer’s Arsenal

Finally, there are a few other nutritional recommendations worth noting for their specific benefits in preventing and treating dementia. So, although your fundamental strategy for preventing dementia should involve a comprehensive lifestyle approach, you may want to consider adding a few of these natural dietary agents to your anti-Alzheimer’s arsenal. These four natural foods/supplements have good science behind them, in terms of preventing age-related cognitive changes:

Secrets to Success in Quitting Smoking

It’s never too late to benefit from stopping smoking. I believe the “secret” is to get healthy first, which will make quitting that much easier. If you have implemented the diet and lifestyle strategies outlined above, you are well on your way! Exercise is particularly important here. Research shows that people who engage in regular exercise (specifically, strength training) are TWICE as likely to succeed in quitting smoking as those who don’t exercise.

Studies also show that two-thirds to three-quarters of ex-smokers stop unaided, so if you’re thinking of quitting smoking, try going cold turkey. However you choose to go about it, I strongly advise against using “anti-smoking” drugs like Chantix, which have potentially serious side effects, including depression, suicidal behavior, and a multitude of other problems. Proper nutrition, regular exercise, sound sleep and good stress management are far better ways of approaching smoking cessation. EFT, which I mentioned earlier in reference to stress management, can also be a powerful tool for keeping tobacco cravings to a minimum.