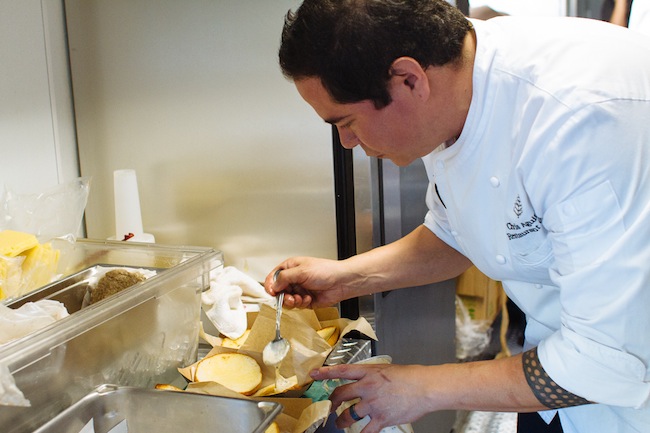 The Four Seasons Food Truck will embark on a nine-city culinary tour down the East Coast, serving up plenty of gourmet street food along the way.

From September 15 to November 11, the Four Seasons Food Truck will be making its way down the Eastern seaboard on a 43-day, 1,037-mile journey from Boston to Miami. The chefs at Four Seasons hotels and resorts in each of the nine destinations have crafted unique menus specifically for the tour, each one expertly designed to highlight some of the best flavours their cities have to offer.

From savoury Lobster Rolls in Boston to Butter Pecan and Peach Ice Cream Sandwiches in Atlanta to spicy Vampiros Steak Tacos in Palm Beach, expect a tasty range of on-the-go gourmet meals at every stop.

Here are some of the recipes form the food truck.

Ingredients for the Lobster Roll:

1. Whip crème fraîche in a chilled bowl until light and airy.

2. In a separate bowl, mix remaining ingredients and season to taste.

4. Set aside, refrigerated until ready to use.

1. In a large pot, poach lobster in court bouillon.

5. Top with avocado and garnish with lemon.

1. Sauté beefsteak in olive oil with diced onions, over medium-high heat until cooked.

3. Chill mixture, then divide into 4 equal cylinders about 5-inches long.

4. Lay out 1 piece of spring roll wrapper and wrap the mixture, sealing the edges with egg yolk. Double wrap the roll for extra crispness. Repeat for remaining 3 rolls.

During each tour stop, local diners can follow the Food Truck throughout the city to a full schedule of can’t-miss events. Enjoy a Savannah Crab Cake Sandwich at the Food Truck Showdown in Atlanta, or indulge in Pit Beef Tacos during Purple Friday events in Baltimore. A portion of the proceeds from the tour will also go towards deserving charities in each of the nine destinations.

Follow the Four Seasons Food Truck week by week in the following destinations:

This article was originally published on taste.fourseasons.com. Read the original here.