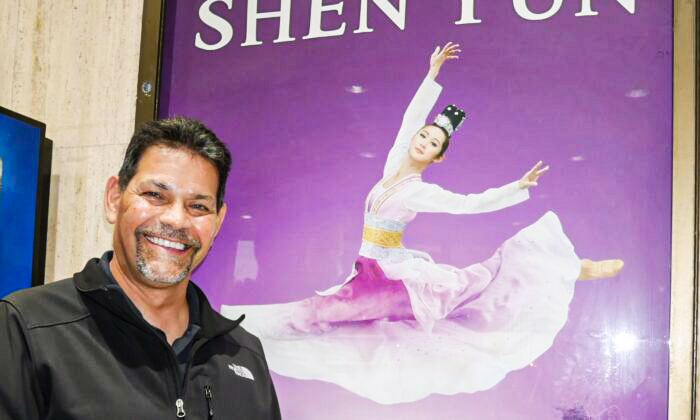 NORFOLK, Va.—When Norfolk goes out for an evening of theater, it’s like a military parade. Represented in the audience of Shen Yun Performing Arts on Nov. 6 were members of nearly all branches of the armed forces, as well as government contractors.

New York-based Shen Yun is a classical Chinese dance program that depicts through dance and music the culture of China before the days of communism. Audience members spoke highly of the experience.

David Cruz is a retired master gunnery sergeant from the Marines who works as a government contractor. He attended Shen Yun with fiancée Tanya Dear, a healthcare administrator.

Cruz called Shen Yun “everything I thought it was going to be and more.”

He appreciated “having a beautiful show representing the past of China prior to communism, aspects of [China] now in the way that people are mistreated.

Shen Yun, known for its graceful and vibrant dance numbers, also shares in its storytelling about current issues facing Chinese society—such as government oppression and religious persecution under the communist regime.

For Tanya, the performance communicated a “tremendous beauty in China that most of us do not realize, as well as the hardships of the people there.

“Some of it is heartbreaking,” she said.

Mathew Roberson is a retired lieutenant colonel who now works for the Army as a civilian.

He and his wife, Loretta, had heard about Shen Yun for a couple of years and, in 2021, finally made it to see them perform. They were surprised to learn that Shen Yun is not allowed in China.

“I didn’t realize that they would consider this offensive,” Mathew said. “But I know communism doesn’t survive with religion, whether that’s Christianity or any other religion. They (communists) want to be the center of everything, so I understand why communism, socialism, and religion of any kind don’t go well together.”

Loretta said she was impressed with the scale of Shen Yun‘s production and the fact that the performance is new every year. The couple said that they will bring their adult sons to see the performance next year.

It’s nice to get away from what you normally do with work, and realize that what you do is so important for a country that’s free and we can have such things.
— Tim Harris

“It’s nice to get away from what you normally do with work, and realize that what you do is so important for a country that’s free and we can have such things,” he said.

As an ex-Air Force officer, Tim has traveled all over Europe and Egypt, but has not had the chance to visit Asia—until now.

“It’s enlightening on the way things are done versus conventional operas or musicals,” Tim said. “It’s very different, but awesome to see the differences.”

Rafael Marquez, a cyber security expert with the Department of Treasury, said he was impressed with “almost everything” about the show.

“It’s sad to see the loss of culture [in China]. But even here in the U.S., we have the same thing going on. There are a lot of people forgetting their roots and where they come from.”

“I recommend everyone come and see this,” he said. “It is just amazing to see the skills and the professionalism that you see here. The beauty of it is how they can get everyone to work as one and flow together. It is just absolutely great.”