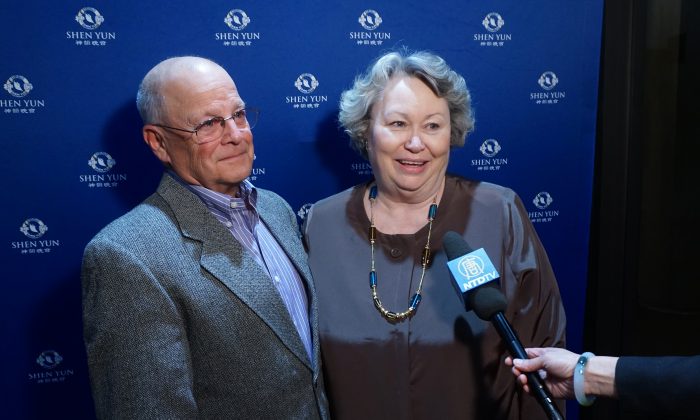 Raina and Scott Guffey said Shen Yun opened up another culture to them. (NTD Television)

NORFOLK, Va.—The performance consists of gravity-defying art, colors that look to be of another realm, and stories from China’s 5,000-year past. And somehow the sum of it shows the goodness of humanity, and the strength of that culture, according to Shen Yun Performing Arts audience members at the Chrysler Hall.

Raina and Scott Guffey attended the second of three performances in Norfolk, Virginia, on March 26, and the two were blown away.

In her words, “I thought it was phenomenal, it was amazing, absolutely loved it.”

The performers seemed to glide, not walk, and through art, speak out for what they believe in, she said.

“It was just really different and awe-inspiring,” said Mrs. Guffey, a marketing director. “I’ve never seen anything like it.”

The couple, already interested in the Chinese culture, said they felt like New York-based Shen Yun really opened up a path into the culture for them.

That beauty shouldn’t be hidden; that should be shown to the world.
— Sheila Nash

The performance—with the serenity of a classical Chinese dance depicting water fairies and the excitement of a folk drum dance in the Mongolian grasslands—had made the once nearly-extinct culture accessible.

There was also a strength and bravery to what Shen Yun is doing, the Guffeys added.

Mr. Guffey, now a student again in pursuit of a second career, explained that the performance also touched on the persecution of spiritual beliefs in China today. The performers were speaking up about the loss of freedom under communist China, and Mr. Guffey said it was a message he hoped people would hear.

This was because the values and traditions Shen Yun showed were that of goodness. Principles like benevolence, kindness, loyalty, justice, and good versus evil are present throughout the stories, according to the program.

“Any time you expose the world to goodness, it’s always a great thing,” he said.

Mrs. Guffey agreed: “That beauty shouldn’t be hidden; that should be shown to the world.”

Sheila and Ron Nash, also in the audience Saturday evening, received that message. They saw a sort of beauty that was moving in the performance.

Mrs. Nash, a retired English teacher, said the performance had captured her from the moment the curtains went up. She saw the beauty of the traditional Chinese culture and people, and thought “we need to let the world know.”

The beliefs of the traditional culture are present even in the stories of modern day China that Shen Yun depicts. There are characters who steadfastly hold onto their faith, which Mrs. Nash said was so important.

It “brings tears to your eyes,” she said, seeing the characters hold on to the truth. “They didn’t give up and that was a beautiful message. I think everybody needs to learn that. It’s an important message.”

It was something that would stick with her beyond the duration of the performance. “I want to bring home the truth and belief that we can be better people and that we can show that love and it should go all over the world,” she said. “Everybody should have that feeling. It’s a good feeling. Happy feeling.”

Mr. Nash said it was a performance he would come to see again.

“It was a wonderful, wonderful show,” Mrs. Nash said. “Meant a lot to everybody.”