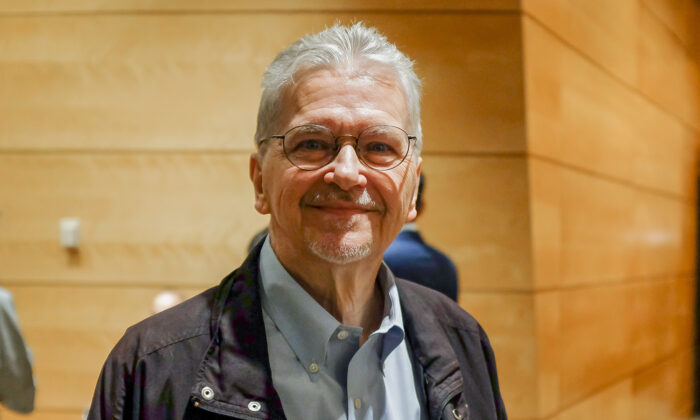 WASHINGTON, D.C.—Every once in a while, you start off with one impression, but somewhere, somehow during your experience, you change your mind.

Dale Whittington, a retired choral teacher, felt that Shen Yun Symphony Orchestra (SYSO) was exceptional: “It’s the greatest orchestra I’ve ever heard,” he said at the Music Center at Strathmore after the orchestra’s D.C. performance. It’s the largest live orchestra he’d ever seen too.

But these superlatives didn’t come to his mind at first.

SYSO, composed of musicians from the orchestras of Shen Yun Performing Arts’s seven touring ensembles, finished the Asian leg of its tour before moving on to North America. It stopped in New York yesterday for two performances before appearing in D.C. today.

Known for its seemingly perfect blend of the East and West, the orchestra folds ancient Chinese instruments like the pipa and erhu into a Western symphony, creating Chinese melodies with classical orchestration.

Mr. Whittington came away on Oct. 13 with the highest praise for what he’d heard, but his initial impression was different: “I first was a little disappointed that they were doing so much ethnic Chinese music, but then I realized, gosh, that just adds to the whole effect.”

By the end the performance, he loved the mixture of Eastern and Western instruments.

What changed his mind? “Oh, it’s obvious,” he said, the quality of what he heard—“super impressive.”

Of course, reaching such a level of performance doesn’t come over night.

But for either the Chinese or the Western musicians, each garnered his praise.

As for the Western instruments, he noted solo violinist Fiona Zheng. “She’s an artiste. She’s magnificent. I loved it.”

And for the Chinese instruments, in particular he enjoyed the pipa players in the center of the orchestra. In fact, after the entire performance, he wondered if Chinese music and musicians might be those who lead us into music’s future.

The evening was memorable enough for him to say, “I’m glad that I lived long enough to hear this.”

In addition to the original Chinese compositions, SYSO includes pieces from the Western repertoire. This year they performed Tchaikovsky’s Valse-Scherzo, a violin piece, and Smetana’s “Dance of the Comedians” from the Czech opera “The Bartered Bride.”

Mr. Aksenov has performed with orchestras in Russia, Moldova, and South Korea and given recitals and masterclasses in these countries as well as Austria, Belgium, Israel, and the United States, including the Kennedy Center.

“I’m not like a regular audience member. I’m professional musician, [and] I have a different impression. I can, first of all, listen to its fantastic skills of the musicians, of the orchestra, conductors.”

This year marks the debut of a new conductor to Shen Yun, Dmitry Russu. He was formerly with Saint Petersburg Philharmonic Orchestra and has joined Maestro Milen Nachev, who has been conducting the symphony for years.

“Very professional design of the music,” Mr. Aksenov said of the compositions. And of the musicians themselves, he said that every musician onstage was superb. “Every, every musician—very great, very high, high level.”

After its D.C. performance, for the following two weekends, the orchestra will appear first in Chicago and then finally in Boston to conclude its own tour before rejoining the Shen Yun Performing Arts company for their touring season.