2
Fauci: Definition of Fully Vaccinated Will Be Changed
11hr
sharecomments 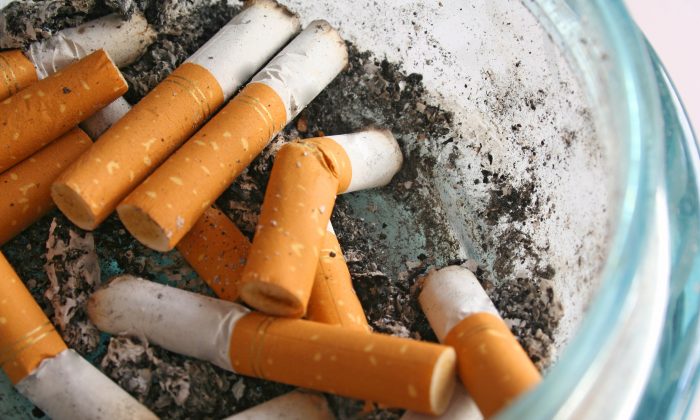 Getting to Know Third Hand Smoke

Evidence proving the chronic health problems that smoking causes dramatically changed society’s attitude toward the habit (eventually). Only a few decades ago, smokers were free to light up virtually anywhere. Today, in hundreds of U.S. cities, smoking is forbidden in or even near public spaces, both indoors and out.

Yet with all the effort made to curb exposure to tobacco smoke, the legacy of smoking lingers on in a substance called third hand smoke (THS).

Despite the name, THS is not really smoke but a chemical residue that smoking leaves behind. THS clings to walls, curtains, carpets, furniture, pet fur, clothing—pretty much anything that comes in close proximity to smoking tobacco product.

Exposure to these compounds have been shown in animal studies to cause lung and liver damage, diabetes symptoms, poor wound healing, and hyperactivity.

Dr. Georg Matt, a psychology professor at San Diego State University, first began studying THS in the 1990s when his research team was working on a smoking cessation study.

“We ran into a little puzzle,” Matt said. “Even though moms had stopped smoking, and even though there was no evidence for any second hand smoke exposure, we were not able to reduce the biomarker levels in infants to those you would find in non-smokers.”

Researchers investigated whether samples had been contaminated, and possible problems with lab analysis and reporting. After ruling out several factors, they wondered if there were perhaps other sources of exposure to tobacco chemicals that were never considered.

Then researchers discovered that smoking mothers who were very diligent about never lighting up indoors still had smoking compounds throughout their home: in the dust, on their hands, and embedded into surfaces.

Naturally, the more exposure to tobacco smoke a room experiences, the more THS it collects. But this residue can also be found anywhere smokers have spent time, even without a cigarette.

“We find it in the cars of smokers, even if they don’t smoke in their cars. We find this in hotel rooms that have been visited by smokers. We find it in rental cars,” Matt said.

According to the American Cancer Society, cigarette smoke contains more than 7,000 chemicals, and at least 70 are known to cause cancer. Exposure to these compounds have been shown in animal studies to cause lung and liver damage, diabetes symptoms, poor wound healing, and hyperactivity.

But there are significant differences between the stale residue of THS and exposure to smoke wafting in the air.

To get a feel for the specific characteristics of THS, researchers refer to the three Rs: Chemicals from tobacco products “remain” on dust and surfaces, but they also “react” with other chemicals to make new chemicals, and then “re-emit” into the environment.

THS compounds can mix with other toxic compounds already present in the environment (such as in paint, drywall, or upholstery), to form new, more dangerous chemicals. THS can also mix with agents used in attempts to clean up THS.

“In the hospitality industry it’s particularly popular to cover up or eliminate tobacco odors because the odor is the number one reason why customers complain about tobacco smoke,” said Matt. “In many cases they involve an antioxidant such as ozone that reacts with some of the odor compounds and changes them to odor free compounds. The problem is that some of these chemical reactions turn, for instance, nicotine into a new pollutant that is more harmful than nicotine.”

THS is pervasive, but whether or not it’s a health hazard is a matter of debate. Critics say THS is more of an overreaction bent on further demonizing tobacco, rather than a serious concern.

Naysayers can even be found among anti-smoking advocates. According to Stephen Hecht, professor of cancer prevention at the University of Minnesota, and editor-in-chief of Chemical Research in Toxicology, the dose of carcinogens we receive from THS is likely too small to do much damage.

THS contains the same harmful compounds that have been studied in the context of active smoking and second hand smoke. But unlike actual smoke which is easily inhaled, THS would have to demonstrate significant ingestion through additional exposure pathways, such as a dermal transfer or children putting their hands in their mouths after touching contaminated surfaces, to pose any real threat. And it’s still not clear how much THS our body takes in when exposed to environments and materials covered in this residue. These are the issues Matt and other researchers are still working to understand.

“We understand that it harms human DNA. We know that it’s involved in cell death. We know from animal studies some of the consequences on organ systems,” Matt said. “The research that we need to do is on long term human exposure in different risk groups, whether it’s children or other health compromised populations. That’s a lot of work that still needs to be done.”

Don’t smoke inside, that’s the single most important piece of advice.

Until then, growing awareness of THS means that smokers can hurt the value of property and vehicles they may one day wish to sell.

“A year and a half ago we did interviews with used car dealers who are keenly aware that the unpleasant odor is very off putting for buyers of used cars. If they are unable to remove or cover up the smell in California, very often they ship the car somewhere else where people are perhaps more accepting of the odor,” said Matt.

THS is notoriously hard to remove. Hotels know all too well the time and resources necessary to clear the stink of cigarette smoke. In some instances, THS can never be totally banished, and things like mattresses, blankets, and drywall embedded with it often have to be replaced to get rid of the residue completely.

Matt and his research team are currently working on how best to clean surfaces contaminated by THS, and expect to have some answers “very soon.” But he says that while remediation efforts can be helpful, nothing beats avoidance.

“Don’t smoke inside, that’s the single most important piece of advice,” Matt said. “And find a space outside that doesn’t allow tobacco smoke to blow inside the home.”