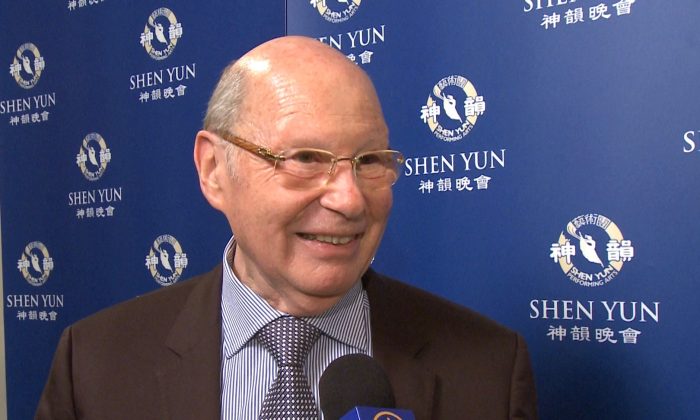 GENEVA—From start to finish, orchestra founder, longtime educator, and the former president in the government of Geneva Dominique Föllmi had nothing but good things to say about every aspect of Shen Yun Performing Arts, from its music to its mission. In fact, he liked Shen Yun so much he saw it twice in a weekend.

“I came to the opening night and came back tonight,” he said.

I’m especially delighted by this show. This is so much what we try to develop in relation to education and to young people.
— Dominique Föllmi

“I am a former president in the government of Geneva and was in charge of education, training, and culture. So you can imagine that I’m especially delighted by this show. This is so much what we try to develop in relation to education and to young people. It is exceptional,” said Mr. Föllmi, who saw the performance at the BFM (Bâtiment des Forces Motrices) on Feb. 27.

New York-based Shen Yun has dedicated its work to bringing the authentic traditional Chinese culture to the world. The 5,000-year culture was once nearly lost, and Shen Yun’s artists aim to revive it through the performing arts.

Mr. Föllmi has dedicated his life to a similar mission, devoting his career to the service of teaching and culture in Geneva. He has served as professor, administrator, and finance director of Geneva University. He was the president of several departments in Geneva’s government and arts and culture organizations, including serving as a member of Parliament, Head of Public Education and Culture, and President of the Government of Geneva in 1990. He was awarded the Legion of Honour, the highest decoration in France, by then-President François Mitterrand.

Though he is not an artist himself, in 2009 he founded L’Orchestre International de Genève, an orchestra specially created to represent Geneva. Dear to his heart is the fight for human rights, and promoting arts and culture.

Shen Yun’s orchestra—an ensemble blending the sounds and instruments of both the East and West—was a delight for Mr. Föllmi.

The orchestra is exceptional, a jewel with such precision.
— Dominique Föllmi

“I would say that the orchestra is exceptional, a jewel with such precision,” he said. “It’s fantastic!”

“The music is powerful, beautiful, it grabs you, you rise with it, it’s really fabulous. On top of that, the conductor is a woman leading such an impressive orchestra. This is very difficult, I know, to accompany the dances with the music. You have to be so precise, so accurate … it’s perfect; it’s perfection!” Mr. Föllmi said.

“What [Shen Yun is] presenting us is total perfection. At the end, we feel good, we want to carry it further, we want to bring this message [Shen Yun gives] us to others. It is happiness, real happiness,” he said.

“I hope that [Shen Yun] will bring this message far and wide and perhaps one day will also hopefully bring it to China.”

Though Shen Yun shows the history of China—”its 5,000 years of history and spirituality,” according to Mr. Föllmi—it cannot perform in China. China today is under the rule of the Chinese Communist Party, which opposes traditional beliefs and culture, as it has been since 1949.

But Mr. Föllmi, like many other audience members, saw hope in Shen Yun’s mission.

“This heritage was lost and [Shen Yun] actually revives it in an outstanding and sublime way,” he said of the performing arts company. “All these artists, dancers, musicians perform in such a surprising and powerful way which brings us higher.”

In Shen Yun, Mr. Föllmi saw “a very strong spirituality, a vision of society with wisdom, goodness, patience which is so important because today there is only materialism.”

“Shen Yun brings something ancient with a fresh look to spirituality and a vision of the world with Heaven, deities, et cetera. It’s wonderful and it’s a message our world needs so much today. Moreover, to love your neighbor and be open-minded is a message we need to hear,” Mr Föllmi said.