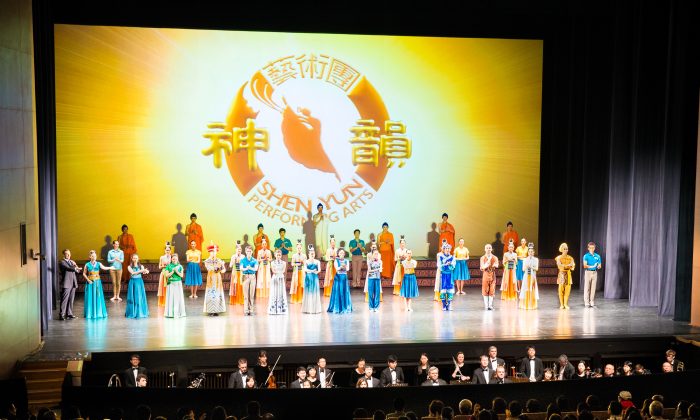 As a professional in the fashion industry, Ms. Ho especially marveled at the vibrant colors of Shen Yun’s splendid costumes. “Shen Yun applies many silk cloths to its costumes. Through gradient dyeing, the costumes are so soft and elegant that dancers looked like they were fairies dancing in the air,” she said.

Captivated by the performance, she said, “[I] feel the entire show is very beautiful and peaceful. We can also see these young performers’ vitality.”

Ho Yu-ling established the O’girl Fashion Company some 30 years ago, and she has been involved in fashion design for over 30 years. Nevertheless, she was deeply amazed by the vibrant colors of Shen Yun costumes.

She explained, “We usually use similar colors in our fashion design, but it turned out that [Shen Yun] used contrasting colors. For instance, green and blue usually would not exist at the same time, but Shen Yun did so.”

“Another example is that orange and navy blue are contrasting colors,” Ms. Ho said. “However, it [Shen Yun] used them quite a lot. As contrasting colors may be too striking, they are usually used in small areas, but they were used in some big areas [in Shen Yun costumes].”

According to Shen Yun’s website, every costume in a Shen Yun performance is presented with brilliant colors, displaying a splendid spectacle—from the Tang Dynasty’s “Raiment of Rainbows and Feathers” to imperial dragon robes, phoenix coronets, and cloud capes; from the civil official’s headdress and robes to the warrior’s helmet and armor; and from the traditional rightward cross-collared Han clothing to the ethnic attire of the Manchurian, Tibetan, Dai, Mongol, and Uyghur ethnic groups.

Ms. Ho explained, “I believe they [Shen Yun costume designers] should have studied colors rigorously. I think the reason why they could use contrasting colors without letting the audience feel strange is that they dealt with the color ratios appropriately. Regardless of which colors are used, blue, orange, and so on, their ratios are very important. When using contrasting colors, their ratios are especially important.”

In addition, Ms. Ho also mentioned that she was deeply impressed with the performance of the solo vocalists. “When listening to solo performances, my heart was very peaceful, and I felt the entire performance is really very beautiful,” she added.

Lu Annong also works in the fashion industry, as a designer. The matinee performance at National Taiwan University of Arts on March 17 was the second time she has seen Shen Yun.

“I saw it [Shen Yun] once before, but it amazed me even more deeply this time, because the overall synchronization of the costumes is more harmonious,” Ms. Lu said. “The colors are consistent with the modern trends, without the stereotype of Chinese costumes. The innovation of traditional costumes would be a very good inspiration for the entire cultural community in Taiwan.”

She said, “I noticed that the design of costumes is in perfect coordination with the needs of the dances. As a result, the layer upon layer of gauze made people have the feeling of surrounding. I was surprised to see that. And it added a lot to the grandeur [of the performance].”

Referring to the perfect coordination of costumes and the performance of classical Chinese dance, she said, “Every program touched me deeply. I can see the thoughtfulness of the production designer. In this regard, I think it’s marvelous. It’s second to none.”

She said “Fairies of the Sea” was the piece that impressed her most. She noted, “The silk fans were like rippling waves. Nobody might have thought of the idea of using silk fans to create such a wonderful effect. I was really amazed by that.”