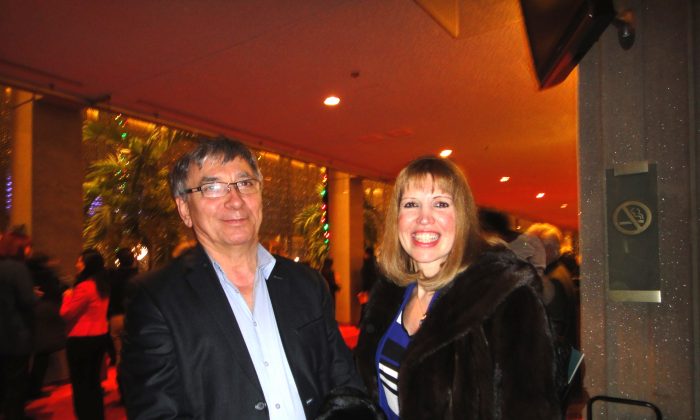 MONTREAL, Canada—The opening night of Shen Yun Performing Arts at Place des Arts took place on the coldest day of the winter so far, Jan. 7, but that didn’t stop a couple owning fur businesses from attending.

Argiriou Furs Inc., a family-owned business with over 30 years of experience in the industry, serves over 20 countries across the globe, specializing in wild furs such as the Canadian lynx, fox, coyote, and mink, just to name a few.

Elysee Furs, based in the heart of downtown Montreal, is another premier providers of furs in the industry. It specializes in mink and other wild furs.

The couple was thoroughly delighted by New York-based Shen Yun’s presentation of 5,000 years of civilization through classical Chinese dance and music.

Shen Yun dancers wear costumes of brilliant colours made by artists who collect countless designs of traditional attire. The costume designers’ objective is to create “an authentic presentation of the attire that comes from China’s divinely inspired traditional culture,” according to Shen Yun’s website.

Mr. Argiriou was particularly enthralled by the costumes.

Mrs. Argiriou was almost at a loss for words.

“It’s a wonderful feeling. It’s a very rich culture and I can’t say more than that,” she said

“I loved how they incorporated the background with the dancers, the music was exceptional, the whole thing put together was really very well done,” she added.

Another feature of the show is the instrumental soloists, including Ms. Mei Xuan, who performed on the erhu accompanied by pianist Yi-CHin Lin. The erhu, often called the Chinese violin, has a history of over 4,000 years and has only two strings. It’s played vertically, resting on the musician’s lap.

Mrs. Argiriou was very impressed by the erhu’s range of sounds and the musician’s dexterity given that the instrument only has two strings.

“I will remember it for long,” said Mr. Argiriou about the show overall.

Shen Yun’s International Company will grace the stage of the 1,453-seat Théâtre Maisonneuve at Place des Arts for another five shows before moving on to Quebec City.