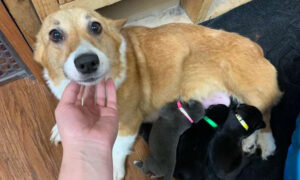 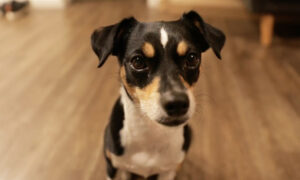 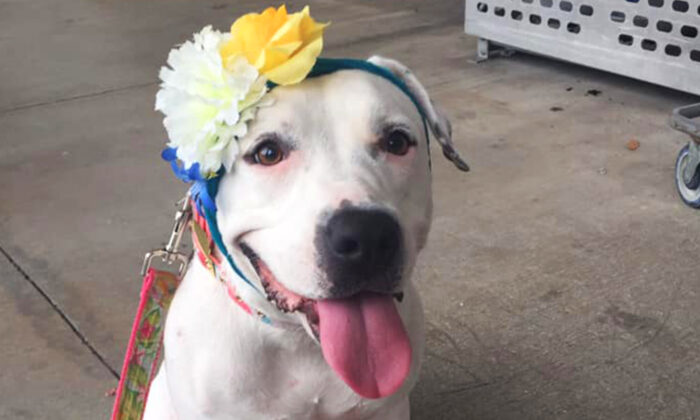 (Courtesy of Love is Fur Ever Dog Rescue)
Life & Tradition

From Bait Dog to ‘Disney Princess’: How a Bonnet-Wearing Canine Became the Face of Hope

A pit bull mix suspected of being used as bait in a dog-fighting ring was found abandoned on a street with severe injuries. Four years later, this canine has not only fully recovered but is thriving and has made it to an upcoming Disney plus series.

In November 2016, the founder of Love is Fur Ever Dog Rescue was horrified when she came across a photo of a pit bull mix at Miami-Dade Animal Services in Florida. The dog had been picked up as a stray and brought to the shelter.

“Her whole entire side of her face was missing,” Frazier told The Dodo. “Her skin tissue was hanging. Most of her ear was gone.” Additionally, Frazier said that her ear had been ripped right down under her eardrum.

At that moment, Frazier knew she had to step in to help the poor dog and immediately contacted the shelter. A day later, Frazier and her husband brought the dog, later named Abigail, to Pets First Wellness Center for treatment by veterinarian Dr. Thomas Jackson. According to him, Abigail was one of the worst cases he had come across.

“She had multiple bites all through the top of her head, her ear was missing, the muscular holding the side of her face was chewed out,” Dr. Thomas described the injuries to Fox 4. He and his team performed several surgeries and skin grafts to save Abigail, though her right ear couldn’t be saved.

The story of Abigail’s rescue soon gained international attention as people started following her recovery journey on the Facebook page Bonnets For Abigail.

However, there is another very special reason for her newfound fame—the pooch is always seen wearing fanciful headbands.

Frazier has been taking care of and fostering Abigail following her surgeries. Once, when Frazier was changing the dog’s head bandages, she happened to see the gauze forming the shape of a bow. This prompted Frazier to put headbands over the bandages to make Abigail “look cuter,” according to Abigail’s story on her Facebook page.

“Her bonnets just make her personality. She’s just so bubbly and jumpy and giddy and happy,” Frazier told WINK news.

People around the world who were touched by Abigail’s rescue soon started to send her bonnets. She had hats for almost all seasons.

Eight months after being with Frazier and her husband, Abigail was ready for a new home. Hundreds of people came forward to apply for the adoption of this sweet dog. However, Frazier wanted to choose a perfect family for Abigail’s forever home. The dog was then adopted by Jason and Megan Steinke in July 2017. The couple has another rescued pit bull named Tala.

After the adoption, the couple signed Tala and Abigail for therapy dog school, and the two siblings successfully graduated in September 2017. In the same month when Abigail became a certified therapy dog, she was also named the American Humane’s hero dog of the year.

On Abigail being named the “hero dog,” the Fraziers and the Steinkes were equally excited.

“Honestly, I can’t describe the feeling,” Frazier told TODAY. “I’m proud and excited for her.”

“She’s just happy,” Steinke said of Abigail’s reaction. “It was definitely a magical moment. And she knew.”

Needless to say, Abigail was dressed to the nines for the ceremony, with a special red headband made just for the event. The colorful headbands have now become Abigail’s signature look, and a symbol of hope, love, and change.

“We really hope that people look at Abigail, this pit bull, and see that she has defied the odds,” Steinke said.

Now three years later, Abigail is continuing to touch hearts like she previously did and is again making headlines. According to her Facebook page, Disney reached out to Abigail’s family to share her story on Disney+ latest series, “It’s a Dog’s Life!” hosted by Bill Farmer, who is often recognized for his voice of Pluto and Goofy.

Announcing the wonderful news on Facebook, the post read: “Former bait dog to Disney princess! Abigail and her Cinderella story are going to be featured on the newest Disney+ show, It’s a Dog’s Life!”

According to the Facebook post, the 10-week show will feature dogs around the country that have done amazing things at their canine jobs.

The brave and amazing Abigail will be featured in the episode due to air on May 29, 2020.