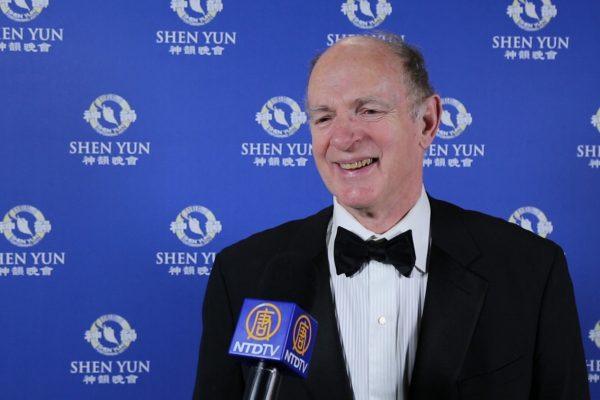 PARIS—On Saturday, Jan. 19, the sixth performance of New York-based Shen Yun Performing Arts in Paris was like a gala evening. As with previous performances, the classical Chinese dance company performed to a full house whose audience came to discover the 5,000 years of Chinese civilization with almost an air of reverence.

This French-American investor who lives in New York and has received the Legion of Honour and the National Order of Merit, has discovered Shen Yun in Paris, thanks to his children who offered him tickets as a Christmas gift.

Like many spectators when they first meet Shen Yun’s artists, Mr. Treuille immediately summed up his impression of the first part of the show with “a lot of serenity, a lot of peace and a lot of traditions.”

It seems to be a common feeling to feel a certain peace coming from the artists on stage, all of whom practice the traditional Chinese meditation of Falun Dafa. The harmony between man, heaven and earth, central in the traditional Chinese culture, is also central in the message of Shen Yun’s artists, which Mr. Treuille expresses as “a communication with nature, a symbolism that we do not necessarily understand, but that we guess, and that is very sweet, very calm.

“It’s a beautiful evening!” he added.

The scene which impressed the most our Mr. Treuille, used to the frantic pace of New York life and the Internet sector in which he invests, is “the scene where the dancers start dancing very slowly. There is really a lot of power, and a lot of peace. I loved that moment.”

Moreover Shen Yun revives a lost heritage on stage, recreates broken links with the traditions of humanity, and Antoine Treuille said he felt the peace of “a real relationship with nature that is always soothing, and then a form of spirituality.”

Various scenes enhance this spirituality ever present in the show, and reminds us that the traditional Chinese culture has always been closely linked to the divine, each dynasty preserving this link to the mythical origin of this civilization.

Mr. Treuille believes this is a message that remains relevant in modern society.

“We all need spirituality. We all need to elevate our spirit. We all need hope, calm, serenity, and I find that this show evokes the peace we need today,” he said.

“It’s really part of the human heritage. And it is these things that must absolutely be kept alive and not be lost.”