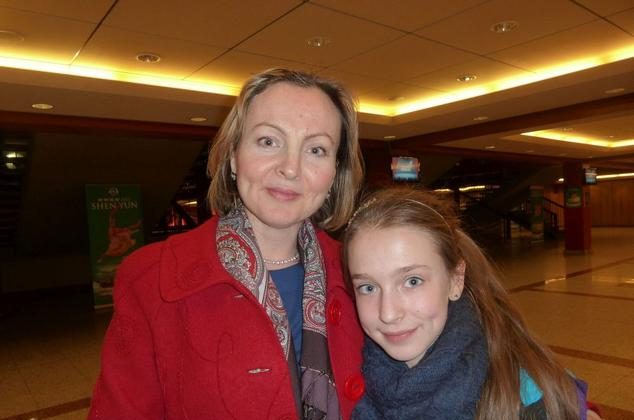 She said, “Shen Yun was fabulous, incredible and terrific. The synchronization was phenomenal and I felt the spirituality throughout the show. It is mind-boggling.”

“For me, it represented a unified body and soul, all of which came through quite clearly.”

Shen Yun is a New York-based classical Chinese music and dance company, and it’s mission is to revive China’s 5,000-year traditional culture, which was steeped in spirituality.

‘There is the wow factor’

Dr. Herman Schlinktwein, an attorney, said it is hard to express what it is like to experience Shen Yun. “One is drawn to what is presented on stage, yet it is very difficult to formulate what one has seen, actually I’m unable at this time to do so.”

It’s surprising and nearly impossible to anticipate. It’s like visiting another world, according to Dr. Schlinktwein.

“I will definitely recommend the show, but I will tell everyone to not expect this or that. Because, once the curtain opens there is the wow factor and something you would have not expected.”

“If you want to be surprised, this show is a must. It is another world, especially for a Westerner. All I can tell that it is of deeper and more complex content than they would expect.”

Mr. Juergen Denne, owner of a consulting firm in Bad Homburg and an executive member of Frankfurt’s Rotary Club, said
“It was fantastic to see the constant change from beauty to compassion to oppression and then back to the beauty. This constant change in scenes is marvelous.”

‘If one has a belief one will not really turn bad’

Mr. Memh Toan Hoynh is a native of Vietnam who owns an export firm. Shen Yun reminded him of his home country.

“The music was wonderful and my mind kept returning to my native Vietnam.”

“I also was not allowed to have a belief in Vietnam, but now it has eased up. If truth be told, if one has a faith one will not really turn bad. People know that there will be no punishment because one has been good.

According to Shen Yun, “China was once known as Shen Zhou, The Divine Land. This profound name describes a land where deities and mortals coexisted, and a belief that the divine transmitted a rich culture to the people of the earth … For thousands of years, Buddhist, Taoist, and other disciplines were at the heart of society. Calligraphy, music, medicine, attire, and much more were said to have been passed down from the heavens.”

According to Shen Yun: “Shen Yun is very much suitable for all ages. Families are a big part of our audience and each year children have their favorite pieces, such as the Monkey King.”

Ms. Kasten was unnecessarily worried about bringing her young sons to see such a formal and elegant performance, in case they were too young to enjoy it. “At the beginning I was concerned, but when I looked at my son … I knew that he was immersed into the show. I could see the interest by looking at his face.

“I think a great deal has to do with the constantly changing photos on the backdrop. Therefore, Shen Yun is not just for adults but also appropriate for children.”

According to Shen Yun, “With state-of-the-art graphics technology, Shen Yun’s digital-backdrop team creates vividly animated settings, extending the stage and transporting the audience to a world where heaven and earth are one.”

Reporting by Wen Jing and Heide B. Malhotra