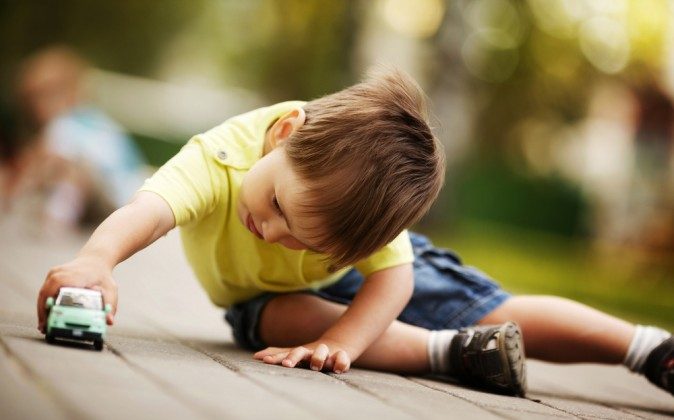 The more traffic pollution a pregnant woman is exposed to—especially during her third trimester—the greater chance her child will develop autism. That’s the conclusion of yet another study, this one published online in the October 2014 edition of the journal Epidemiology.

It was only about a decade ago that scientists first began looking at whether air pollution impacted infant development. Today, four studies link traffic pollution exposure to autism, a developmental disorder characterized by social problems, communication difficulties, and repetitive behavior.

According to lead author of the latest study, environmental epidemiologist Dr. Amy Kalkbrenner, the literature has been very consistent.

“When looking at health impact in a human population, not a controlled animal experiment, getting this level of consistency is, in my assessment, notable,” she said.

Autism disorders have increased dramatically in the last 20 years. While there is some debate about whether this increase is due to a true rise in symptomatology or just better awareness and evaluation, it’s clear the disorder has a broad reach. Today, as many as 1 in 68 children born in the U.S. fall somewhere on the autism spectrum.

Most researchers agree that environmental factors play some role in the development of autism, but there isn’t much consensus for a single cause. While Kalkbrenner is confident about her findings, she says that doesn’t mean traffic pollution is the trigger for everyone.

“For every health condition there’s a constellation of causal influences. It’s not a one cause one disease world,” she said. “What this means is that for some children air pollution might be part of that causal pie of all the pieces that came together to tip the balance.”

Examining air chemistry can get pretty complex, and much of the work of a scientist isolating an environmental health hazard involves ruling out alternative explanations. Previous studies linking autism and traffic pollution have focused attention on clear markers of auto emissions, specifically nitrogen dioxide. Kalkbrenner zeroed in on air particles.

The U.S. Environmental Protection Agency regulates two sizes of contaminant particles. The course particulate matter: less than 10 micrometers in diameter or PM10 . And the fine particles: less than 2.5 micrometers or PM2.5. For her study, Kalkbrenner looked at records from pollution monitors all over the country that test the air for these particles. The monitors take readings on a daily or even hourly basis to demonstrate compliance with the U.S. Clean Air Act, and gave Kalkbrenner a history of pollution levels in specific locations.

This data provided researchers with much more accurate information about changes in specific locations of air pollution exposure than previous studies, but it still had some limitations. Not only is PM2.5more likely to be from auto emissions, but animal studies suggest that the PM2.5 particles are more biologically relevant to developmental problems in the brain. However, pollution monitors during the years of Kalkbrenner’s study did not separately measure fine and course particles.

Another important study design feature was a second location. While previous research only looked at California, Kalkbrenner also examined similar data in North Carolina to see if the traffic-autism pattern held up under different air pollution mixtures and seasonal conditions.

When pre-conception through first birthday records of 164,500 children were compared with pollution data, both states revealed a significantly greater number of autistic cases with mothers exposed to higher pollution levels. Scientists also discovered that weeks 31 to 36 of the pregnancy was when the fetus was most susceptible to the impacts of air pollutant particles.

Other studies have noted a greater neurodevelopment impact in the third trimester, but why this happens is still not clear. Some evidence suggests that this is when the fetal brain is undergoing the delicate process of synaptic connectivity and that autism develops when connectivity goes awry.

Another remaining unknown is which traffic-related chemical (or chemicals) is actually causing the disorder. Cars release dozens of toxic air chemicals. As these chemicals mix with the sun, the air, and each other, new compounds form and the picture grows more complicated.

“It could actually be two or several chemicals acting together in synergy,” Kalkbrenner said. “In my world this is considered the problem of mixtures: that a group of chemicals together could act very differently than a single chemical in isolation.”

Until we find conclusive evidence of the problem chemical, Kalkbrenner is often asked what a woman should do to avoid potential problems with her pregnancy.

“Unfortunately, I don’t think there’s a lot that an individual person can do,” she said. “This is a classic public health problem, if you will—where it takes a village. It takes people working together to solve this problem.”