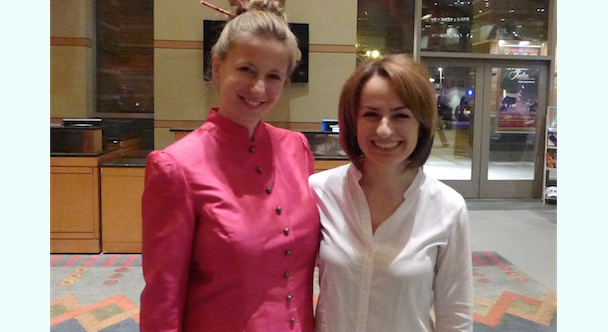 NEWARK, N.J.— Theresa Napolitano, founder and general manager of the Law Office of Theresa M. Napolitano, did not expect to find a profound message about humanity when she went to see a classical Chinese dance performance at the New Jersey Performing Arts Center on April 11. Yet she was so glad that she did.

“There were these very profound spiritual messages that can relate to people from all different religious backgrounds, or just human backgrounds,” Ms. Napolitano said.

Shen Yun Performing Arts is a classical Chinese dance group that is based in New York. Its mission is to revive 5,000 years of traditional Chinese culture, which is a largely spiritual culture.

As an immigration lawyer, Ms. Napolitano’s job is deeply connected to the embracing of others. Ms. Napolitano said she was moved by the performance’s message of compassion and tolerance.

“For people to deal with each other and not react with force when force is used against you,” she said. “You saw that in certain parts of the show, where one could easily react with violence, but compassion and kindness won over the violence.”

Shen Yun is not allowed to perform in China today. It dedicates two dances to raising awareness about human rights abuses in modern China.

“It’s beautiful.. not only in an artistic way, but in a human way,” Ms. Napolitano said. “I am thrilled with this production and I am going to make sure next year I have many tickets for my friends.”

“I loved it. Everything was great,” said Mariyam Dzhanibekov, who attended the show with Ms. Napolitano. “Next year hopefully I’ll come again.”