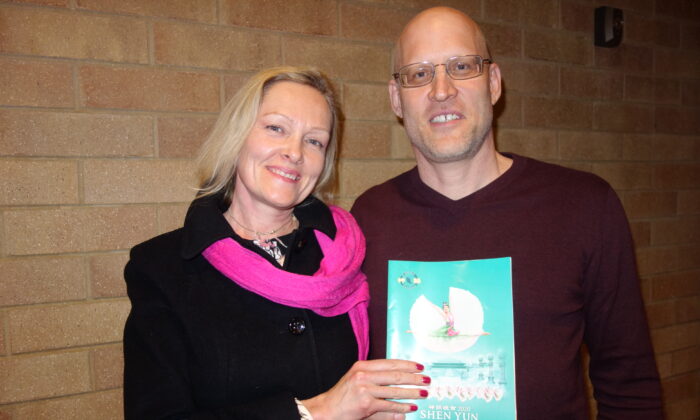 BOISE, Idaho—Bright, colorful lotus flowers rise out of thick mud each morning without getting so much as a spot of dirt on their petals. How they achieve this inspiring and miraculous-looking feat has baffled people for centuries and encouraged those facing trials to keep up hope and search deeper for the ability to rise above circumstances.

Traditional culture itself has faced terrible trials in the last few decades, a fact that theatergoers Olga and Phil Kocham are well aware of and have personal experience with. They attended Shen Yun Performing Arts in Boise, Idaho, on Jan. 28, 2020, and were grateful for the group’s effort to revive China’s traditional culture in the face of pressure from the current communist regime.

“I would say the one thing that probably could topple … the communist regime, the iron-fisted, crushing of, soul-crushing, right, would be that message, right? And I think it would resonate with traditional, with Chinese people. It’s a very strong undercurrent,” Phil said about Shen Yun’s mission to revive China’s divinely-inspired culture.

It was not Olga’s first time seeing the performance, and it would not be the couple’s last. Phil and his wife Olga own a real estate company and plan to bring their friends to Shen Yun next year.

“I grew up in the Soviet Union and—it was pretty much same what’s happens in China,” Olga said, after seeing dances in Shen Yun that depict the brutal and ongoing persecution of spiritual believers there.

“They [the Soviets] at least prohibited, and the most prosecuted, people who were religious,” Olga said, relating her own story about how her grandmother had wanted her baptized, but her parents who grew up under the atheist regime were against it because it was prohibited by the state.

“So yes, I can feel the pain and it’s great that [Shen Yun] can do it and bring the Chinese traditions here,” she said.

“It was beautiful! It’s fantastic. Yes, wonderful. Magical,” Phil said about the connection between culture and spirituality he saw in Shen Yun.

“I’ve seen many, many dancers but they [Shen Yun] are always completely synchronized,” he continued. “Usually you see dancers, there’s always one that lags the other. The synchronization was perfect. And that’s just dedication and repetition and really every person coming every day bringing—their best performance.”

“I saw it in Arizona first time,” Olga said. “It was beautiful. I was blown away. And now it’s my second time and I’m amazed as well. It’s a great, great performance. Just very high level and just breathtaking.”

Phil gave his wife a sweet, genuine kiss to thank her for bringing him to this, his first Shen Yun performance.

New York-based Shen Yun was started by artists who had left China, wanting to present the traditional culture they could not under the communist regime. Since its inception in 2006, it has become the world’s premier classical Chinese dance company and seeks to bring the 5,000 years of divinely inspired culture to life through music and dance.

Phil, too, has had a personal run-in with the Chinese communist regime that left a lasting impression on him. A former college classmate of his was suddenly and unexpectedly forced by the Chinese regime to leave her child behind when she came to Oregon to become a physicist. After a year went by, Phil found her in tears at not being able to bring her child to live with her. After Phil learned about her predicament, he contacted his local political representative who stepped in and put pressure on China to release her child. It worked, and the two were united.

Phil had deep thoughts and feelings about communism’s detrimental effect on societies and on the world. He responded to the true stories of persecution in Shen Yun, where people are pressured into abandoning their consciences and carrying out evil deeds in the name of atheism and materialism.

“What they [communists] do is they separate ‘us’ and ‘them,’ and then create an enemy, right, that you must hate. And that’s how they get us to give power to them. So the minute you realize that the egoic mind first separates, then either elevates or pushes down to create differences. And as soon as you resist that, they lose their power. You won’t give someone power if you don’t believe you have an enemy. So that’s what’s most important, I think,” he said.

Phil added his observation that when people abandon their faith in God and heaven, dark and hateful things come to fill that void, and “you’re left with a soulless, blank, terrible world,” he said, a very different world than Shen Yun depicts on stage. Traditional Chinese culture, as most traditional cultures, believes in the divine. China was once known as the Celestial Empire, its culture believed to have been passed down from gods to humankind. For 5,000 years, people lived in accordance to keeping harmony between man, earth, and the heavens, and Shen Yun artists seek to live that in their daily lives as well.

Olga and Phil wanted Shen Yun’s artists to know how much they and their hard work are appreciated.

“Their dedication and their joy and their ability—it’s where; where it all meets and comes together,” Phil said. “Because they are obviously very talented and genetically disposed to that, but then the hard work, right, because if you’re so talented, things come easy. But then they had to work so hard. So I’m; it’s just; it warms my heart and it’s admirable.”

With reporting by Lily Yu and Brett Featherstone.