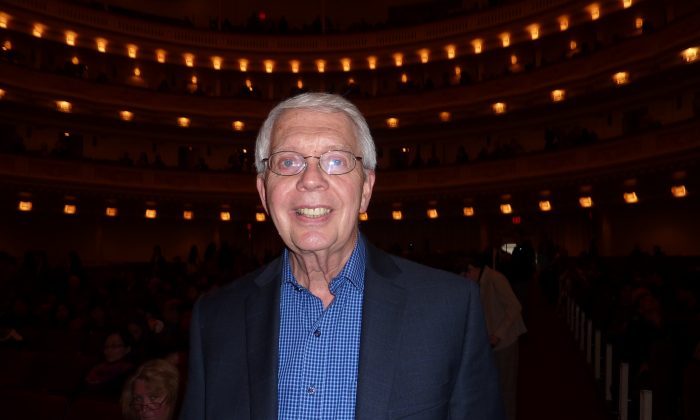 NEW YORK—David Conner, a long-time music director for the children’s television program Sesame Street, was impressed by the seamless blending of melodies by the Shen Yun Symphony Orchestra at the famed Carnegie Hall in New York City this Saturday, Oct. 11. Audiences were given the rare chance to experience the combination of a Western symphony with ancient Chinese instrumentation.

“The fact that the orchestration was well done so that you could hear the combinations, and the melodies, really are important when you’re combining instruments. And I think they kept to that tradition,” said Conner.

The orchestra performs all-original compositions that combine the spirit of the Chinese music with the power of a Western orchestra. It also performs well-known favorites from the West, such as Antonin Dvorak’s “Carnival” overture. It is the only symphony orchestra in the world that features musicians playing Chinese instruments as permanent members.

Conner was especially moved by the two-stringed Chinese instrument called the erhu. The instrument dates back 4,000 years, and is among the most expressive instruments in its ability to convey both joy and sorrow, explains the Shen Yun website.

On Saturday, the orchestra performed a piece titled “Sorrow Melts Away,” featuring an erhu trio playing with the orchestra. Its style draws from folk music traditions of northern China, according to the program book. The musical styles varied widely from dynasty to dynasty throughout history, and from one ethnicity to another within the diverse nation of China.

Conner was enamored by the musicians’ skills: “Having gone to many concerts, I think it’s certainly worth anyone’s interest coming in to hear an orchestra of this quality.”