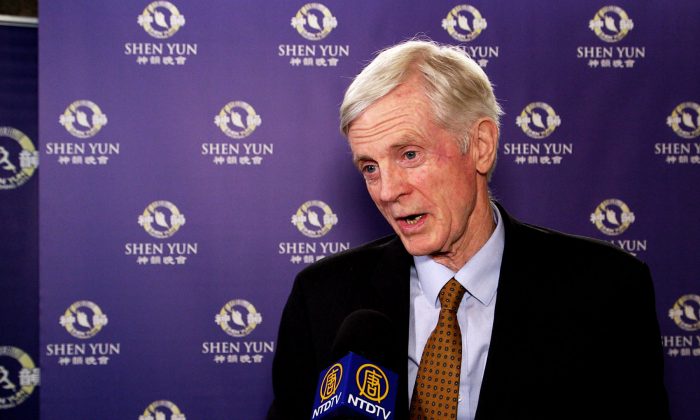 “This year was wonderful. I don’t know how [Shen Yun keeps] getting it better—the dancing, the costumes, the background scenes, singing, the humor. The emcees were always terrific. They were especially good tonight. I think it’s the best show I’ve ever seen in, what, 11 years? So I don’t know how [Shen Yun is] going to keep on getting it better and better each time, but this year’s was fabulous.”

“[The last scene ends] on a note of hope, showing that the bad, or the evil if you like, will be defeated, I think it is very, very smart, and I think it’s going to happen.”

“The traditional values and the values of truth, compassion, and forbearance [in the performance]—I was amazed, and every year I see in the program greetings from the prime minister, the governor general, and so on, the mayor. I think what’s happened is that Shen Yun has become very mainstream: Grandparents can come with their grandchildren, families can come, more and more Canadians are aware of this culture, this culture in China that’s thousands of years old. I think more and more Canadians are aware [that] … this culture of China has been completely sidelined since 1949 by the Communist Party of China.”

“I watch the dancers and I say, ‘how can they do that?’ The flips and the backflips, and as the emcee said, this is not just acrobatics, this is part of traditional Chinese dancing. That’s what is getting through to people—that this is traditional Chinese culture, what we’re seeing now [in Shen Yun], whereas, for example, Mao Zedong loathed and detested Confucius and in fact destroyed his grave. This sort of communist overbear from Europe—Marx and Engels in Europe—has got nothing to do with China and its people, its traditions, its history, and its culture.”