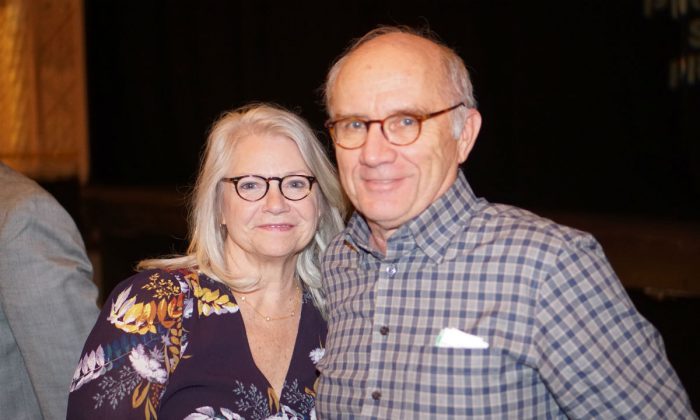 Mike McMullen and his wife enjoyed Shen Yun Performing Arts in Philadelphia during the matinee on Feb. 21, 2019. (Lijie Sun/Epoch Times)

PHILADELPHIA—Former pharmaceutical executive Mike McMullen was impressed by the overwhelming amount of talent that he saw before him when he experienced Shen Yun Performing Arts.

“Everything so far has been so perfect. It’s just perfect,” he said.

McMullen saw the traditional dance and music performance with his wife Nadine at the Merriam Theater during the matinee on Feb. 21. The former executive from Pfizer said he’s watched a number of shows in his life and Shen Yun has been one of the best.

“We’ve seen quite a few and it ranks right among the best,” he said.

Shen Yun is currently in the midst of its 2019 tour and is captivating audience members in over 100 cities around the world.

The New York-based company’s mission is to revive China’s 5,000 years of semi-divine culture that was lost amid seven decades of communist rule. It showcases classical Chinese dances as well as several ethnic and folk dances from different regions around China.

From tales of cultivators in temples to divine beings in heavenly realms, a large part of Chinese civilization is inspired by the heavens. This is because China was known as the land of the divine, or Shen Zhou, which describes a time when mortals and deities co-existed on Earth. The spirituality in the stories and dance encourage audience members to reflect and provide them more than just entertainment.

“I really liked it that they’ve given a [spiritual] message to each of the different sections of the show. … It’s given it some deep meaning, as well as the beautiful acts that are being made. That’s made a huge difference,” McMullen said.

Along with dance, Shen Yun performances also include vocalists who sing in the bel canto technique, which is difficult when having to retain proper Chinese pronunciation and diction. Many of the song lyrics invoke philosophical reflection about human life and containing deep layers of meaning transcending beyond the boundaries of nation, race, and culture.

McMullen said it helped to have the English translations in the background. He said, praising the tenor, “not only did he have a beautiful voice, obviously and a great singer, but it gave some meaning to the words that he was saying even though we didn’t understand.”

The former executive said he would recommend the performance to friends.