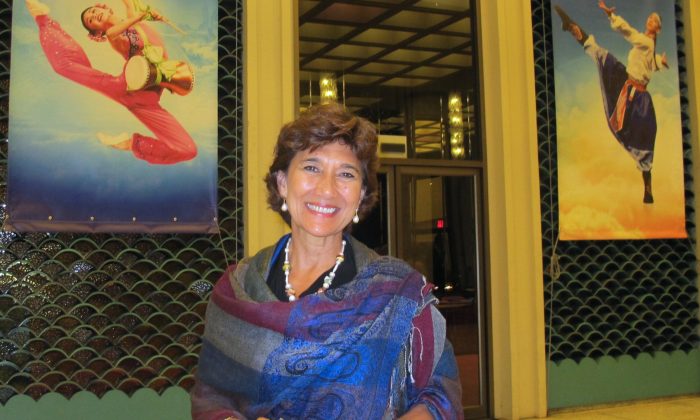 Ms. Berg, who currently teaches leadership training, served in the Hawaii State House of Representatives from 2004 to 2010. She is the recipient of numerous awards, including the Hawaii Bar Association’s “Liberty Bell” award and the Filipino Women’s Civic Club “Woman of the Year.”

“It was amazing,” described Ms. Berg, “I am beginning to understand that there is something deeper than just the performance.”

Established in 2006, New York-based Shen Yun is a non-profit organization dedicated to reviving 5,000 years of China’s divinely inspired culture through the performing arts. Having reached millions of people across nearly 20 countries and 100 cities, Shen Yun is now widely regarded as a global phenomenon.

Seeing the performance for the first time, Ms. Berg found it to be inexplicably stirring.

“I was very touched at the beginning of the show and I wasn’t sure why. But something was making me tear,” she said. “I have a sense that it is very profound.”

What was so moving to Ms. Berg about the show, she surmised, was both the “beauty” and “sincerity” of the dancers.

According to the Shen Yun website, “Classical Chinese dance is a culture left to us by the ancients who came before us, its beauty should be riches shared by all of humanity, its purity should not be contaminated. Shen Yun Performing Arts’ dance style is built upon classical Chinese dance as a foundation, while also maintaining a number of ethnic and folk dances. This combination embodies Chinese people’s aestheticism and ethnic character.”

Recognizing the impact that the performance had on her, Ms. Berg was very appreciative that Shen Yun would get to be seen by so many others.

“I was touched really, and am very grateful that they are here,” she said. “And happy that our community gets to enjoy it, too.”

It’s a performance that people “absolutely have to see,” she added.

As the website states, “Sophisticated dance techniques, an orchestra joining instruments from both the East and West, beautiful costumes, and a stunning back drop—this is Shen Yun at first glance. But digging deeper, one discovers a sea of traditional Chinese culture. Mortals and divine beings merge on stage as one. Principles such as benevolence and justice, propriety and wisdom, respect for the heavens, and divine retribution, all come to life, washing over the audience.”

To those who have yet to see the Shen Yun for themselves, Ms. Berg would share a few words of heartfelt advice.

“I would share with them it’s an unexpected experience of great joy, beauty, grace, and fun,” she exclaimed. “That’s what I would say.”

With reporting by Lily Yu and Morgan Bradley