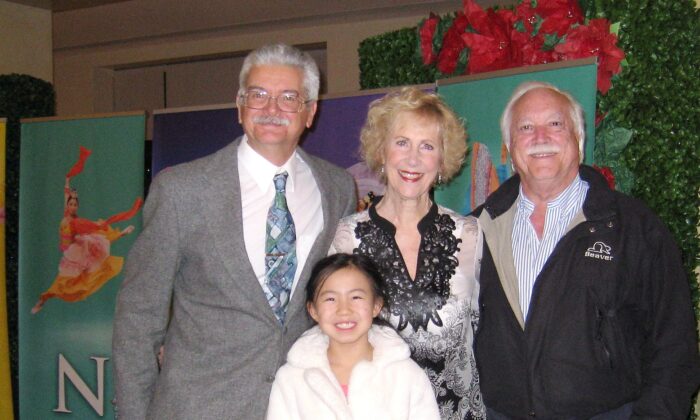 Bob Jacobs (L) and the Baldwin family members enjoyed Shen Yun at the California Center for the Arts in Escondido, on Jan. 21, 2020. (Sophia Fang/The Epoch Times)

“It was beautiful like figure skating,” said Donna Baldwin, a retired ice skating coach, who also holds a Ph.D. in developmental psychology.

Donna attended the performance with her husband John, who is also a former ice skater, and current owner of Baldwin Auto Sales. The pair met through figure skating, and their three children also grew up skating. The couple’s son, John Baldwin Jr., is an Olympic figure skater and two times U.S. national champion.

Shen Yun’s website states that classical Chinese dance is at the heart of what Shen Yun does. “Known for its incredible flips and spins, and its gentle elegance, it is one of the most rigorous and expressive art forms in the world.”

John said these flips and spins reminded him of his time on the ice when he was younger.

John and Donna could both appreciate the rigorous training Shen Yun dancers must undertake in order to produce such a pristine performance. John could tell the dancers have trained tirelessly.

“It took a lot of work and effort to get where they are. We know that because we trained a lot. A lot of people don’t know how hard that is,” John remarked.

Audience members who have trained in the fields of music or dance themselves are often left in awe by Shen Yun’s level of precision and technique. Only someone who has themselves trained vigorously can understand what is involved in reaching such a high caliber. Many highly accomplished performing artists are often astonished by and comment on Shen Yun performers’ artistic mastery.

New York-based Shen Yun is the world’s premier classical Chinese dance company, and its name translates into “the beauty of divine beings dancing.” The company’s mission is to revive the divinely-inspired traditional Chinese culture and share it with the world through music and dance.

“Everything’s connected. Everything, everyone, every being, is connected. You let the loving energy flow. You feel the energy. There is energy in the music—everything is vibrations. You have to get the divine vibrations to flow through your being, to let the energy flow,” said Jacobs, publisher for Univelt Inc, the publishers for the American Astronautical Society.

Donna also experienced the essence of the divinely-inspired traditional Chinese culture and said she saw Shen Yun’s universal message and values through the dance.

“There was definitely a spiritual message about integrity and faith. I saw that. It’s universal,” said Donna.

This year, the Baldwins attended Shen Yun after one of their sons saw a performance last year with his wife, and told his parents they would enjoy the show.

The pair said that next year, their other son, John Baldwin Jr., will see Shen Yun with his two daughters and wife, who is also a champion figure skater.

When asked what she would tell her friends and family about Shen Yun, Donna replied:

“Go watch it. And bring your children for inspiration.”

With reporting by Sophia Fang and Grace Coulter.