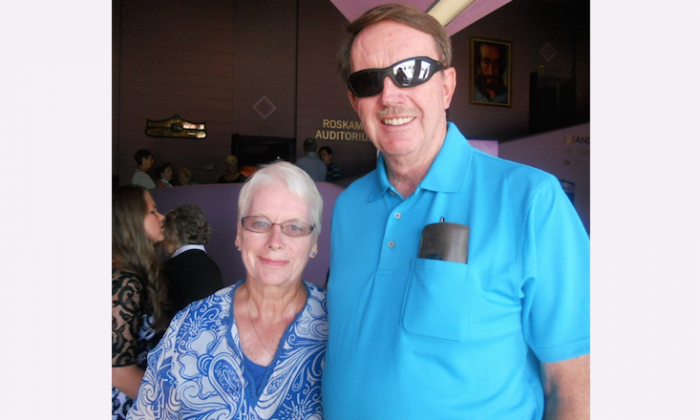 SARASOTA, Florida—Don Cavern, formerly with the Security and Exchange Commission, wondered how he’d describe Shen Yun Performing Arts. “It’s so magnificent that you really have to see it to appreciate it,” he said, after seeing the performance at the Van Wezel Arts Hall on April 23.

Mr. Cavern attended the classical Chinese dance and music performance with Edna Robinson, the original owner of the Houlihan’s Restaurants.

Mr. Cavern said that they’d been looking forward to the performance, “and it’s absolutely terrific, we really enjoyed it,” saying the dancing, costumes, and music were perfect.

“The illustration, the … coordination between the video and the dancers is just perfect,” he said.

Shen Yun digitally animated backdrop creates the effect that the stage performers fly to celestial realms and back to earth.

“I think it’s an excellent representation of the” Chinese culture and the Chinese philosophy of life,” Mr. Cavern said.

At its core, Shen Yun aims to present the values and principles of traditional Chinese culture.