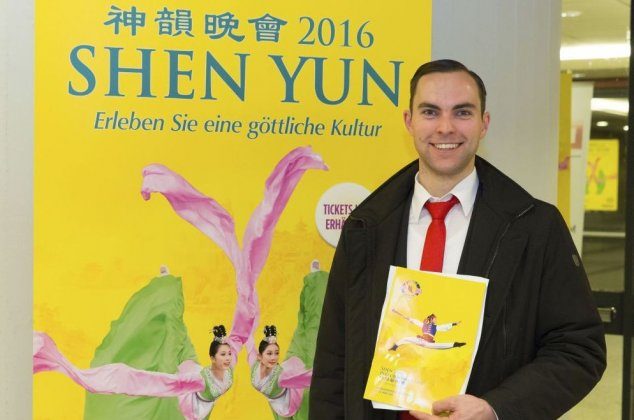 Mr. Ebert began his dance career at the age of 16 and was mainly interested in competitive ballroom dances. This type of dance is considered a sport and has specific rules, structures, and judging criteria.

His dancing career came to an end about a year ago, and he had already started to work in the financial service industry about seven years ago. Yet, his interest in dance has never wavered.

It was of great interest to him that Shen Yun presents classical Chinese dance, which, according to Shen Yun’s website, has a long history of thousands of years, and “has become a complete system of dance embodying traditional aesthetic principles with its unique dance movements, rhythms, and inner meaning.”

With the eyes of an experienced dancer, he recognized that “there are many subtleties in the Shen Yun dances. The skills are extraordinary and require mental training, as well as psychological factors.”

He suggested that his friend, who also was in the audience, should “watch the individual dancers and look for how he or she interacts with the group.”

What was amazing to him is that the “inspiration in the performance radiates from the group and not the individual performer.”

Thinking about it more in depth and looking at it a little deeper, one realizes “that the group exudes greater and more emotion than if one just watches the individual dancer.”

Actually, “when I look at the individual, I can see where he or she is and what would be his or her peak. Looking at it from that standpoint, Shen Yun dancers show perfection at its best,” he said.

He believes that it is “inconceivable that European dancers could reach the perfection of Shen Yun dancers.”

These performers “have my greatest respect and compliment because of what they have accomplished.”

“In reality, the perfection of these dancers cannot be achieved with training alone.” One has to have first a mental image of what one wants to accomplish. Then, compare this to what one has been able to achieve so far. When one can do that, one probably can reach the level of the Shen Yun performers within time.”

He said, “I lack the words to describe where my thoughts have gone. The mental training of such dancers has to go on for hours and be complete from A to Z. Only then can perfection be achieved. The work that one has to put into this is enormous and without it one will not reach the heights needed.”

“For accomplishing such an undertaking, the values, openness, truthfulness, and wisdom have to be developed. Only then can one develop freely.”

Reporting by Yiyuan Zhou and Heide B. Malhotra