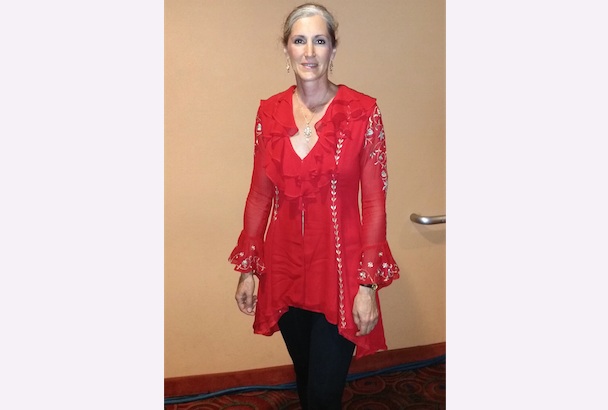 TEMPE, Ariz.—By the time of the curtain call, Shen Yun Performing Arts New York Company had the attention of an enthused audience standing in ovation. Whistles and cheers praised the matinee production, on March 8, at the ASU Gammage Theater.

One of the many standing amidst the thunderous applause was Nancy Greene, a former dancer at the prestigious Victoria Carter London Dance Center in Ontario, Canada.

“Oh it’s beautiful. I examine their foot movements and hand movements and all. It’s very different from ballet, though the gracefulness is there. You can see that it’s a very structured dance.”

She related to the way the emcees describe the show as a whole discipline in itself. Ms. Greene explained, “The way the feet move; the [dancers’] little steps—it gives a very beautiful character to it.”

Ms. Greene said she enjoyed the gracefulness of the female dancers and the strength of the male dancers. “That last one, the chopstick Mongolian dance, it was wonderful. Love it. Just love it,” she said.

She was referring to the piece Mongolian Chopsticks, where, according to the program, male dancers use bunches of chopsticks to dance and create a lively, staccato sound.

Shen Yun is a non-profit, New York-based classical Chinese dance and music company that tours the world six months of the year on its mission to revive traditional Chinese culture, which is believed to be divinely-inspired.

Shen Yun’s website explains, “Throughout history, almost every culture looked toward the divine for inspiration. Art was meant to uplift, bringing joy to both the people who created and experienced it. It is this principle that drives Shen Yun performers and their art.

“Today, Shen Yun artists—dancers, musicians, choreographers, composers, and the entire team—follow this noble tradition. For them, this spiritual connection is motivation for striving to excel, is the heart behind each movement of the dancer and each note of the musician,” the company’s website points out.

When Ms. Greene learned about Shen Yun’s display of the connection between art and spirituality, she wanted to know more, and after watching the performance, she was touched.

“It’s transcendent,” she said. “When I saw that they are trying to combine their dance with their spirituality, that really intrigued me. So it’s been very moving for me. Really just like tears to my eyes at times—very nice.”

Ms. Greene was moved to tears when, in the opening piece, heavenly beings are called to descend to Earth to help people, and how, in another piece, a mother who is persecuted for her faith ascends into the heavens.

“I think they’re doing a beautiful job with just culture and religion. It’s all tied in together. It’s a culture that is so integrated with religion [and] has been for so long,” she said.

“I think that the piece where the mother and the daughter were torn apart really struck me,” she added. “I don’t think I really got how devastating it would be for a culture to have their religion ripped away until I saw that. Really, really amazing.”

Ms. Greene was referring to a piece called The Steadfast Lotus, which is a contemporary story about a mother who is persecuted for her belief and her daughter who remains courageous and faithful.