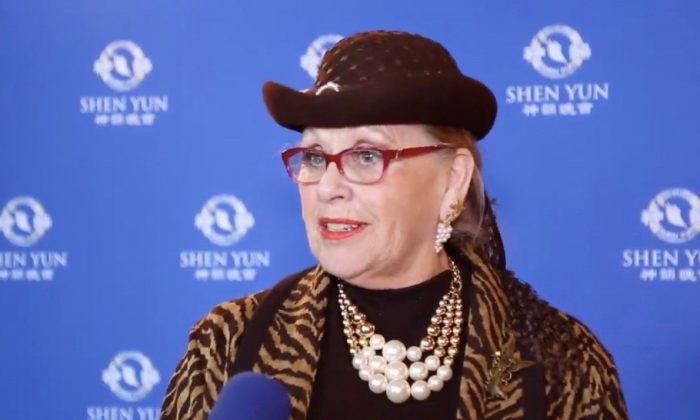 LAS VEGAS—”Awesome, it’s a must see. They must come see this next time it is here,” Vonni Mascarenas said after seeing Shen Yun Performing Arts company on Jan. 23, at Reynolds Hall, The Smith Center for the Performing Arts.

“Because I understand that today is the last day for this trip,” she added. “So yes, I think it is a wonderful show to experience from young to old and everywhere in between.”

Ms. Mascarenas retired as a teamster, however she was also a dancer here in Las Vegas before that. As a former dancer, she was delighted by the Shen Yun dancers.

“It was just … I don’t have the words. It was just very wonderful,” she said.

Shen Yun Performing Arts is a non-profit, based in upstate New York. “Shen Yun cannot be seen in China today, where traditional culture has been nearly lost. Yet Shen Yun—a non-profit organization—has become an international phenomenon, bringing the wonders of ancient Chinese culture to millions across the globe,” explains Shen Yun’s website.

“(It) brought tears to my eyes a couple of times,” she said, explaining that she is glad that Shen Yun is American based, otherwise it wouldn’t be able to tell the whole story the company does.

And that whole story “impresses me much,” Ms. Mascarenas said happily.

Ms. Mascarenas had a hard time thinking of one segment she enjoyed the most, but one finally stood out for her.

“I am very impressed with the “Drums of the Grasslands.”

This vignette has a strong drumbeat, set in the the beautiful grasslands of Mongolia. The program says, “There, a hearty group of horsemen, each carrying thin-skinned paddle drums, take to the open plains in unfettered cheer. Powerful and masculine, Mongolian ethnic dance is characterized by its wide, billowing arm movements and nimble footwork, evoking images of flying eagles and wild stallions.”

“Because my daughter-in-law is from Mongolia, born and raised [there], she had told me [about] some of the dances that they do. So that one kind of tickled my fancy a lot,” she said.