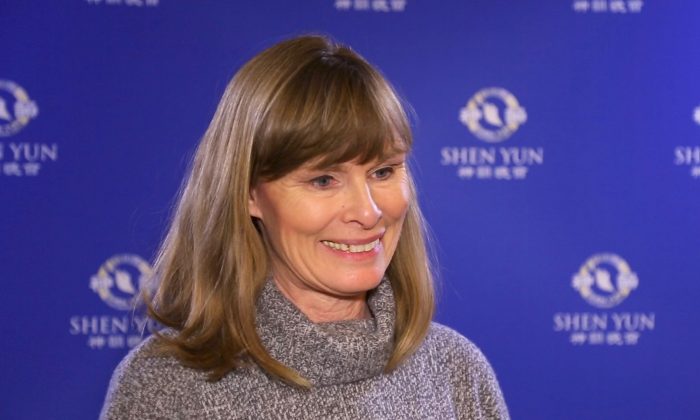 Ms. Chessik, a retired dancer in Las Vegas spectaculars who runs the non-profit Showgirl Legacy, added that Shen Yun’s dancers were “top of the line.”

“I thought they were brilliant,” she said. “Just the technique and the elegance, the women were beautiful and the men were strong.

Classical Chinese dance is at the heart of what the New York-based Shen Yun does, according to the company’s website. The richly expressive movements of this traditional art form—flips, leaps, and spectacular aerial techniques—and its emphasis on bearing, a technique that allows dancers to express their inner spirit, makes Chinese classical dance ideally suited to story-telling.

Shen Yun story-based dances include mythical tales like the adventures of the Monkey King from the renowned Chinese classic “Journey to the West;” episodes in the lives of historical characters like the distinguished Emperor Kangxi; and even the depiction of a brutal persecution in communist China today.

Ms. Chessik said she was “really surprised” to learn from watching Shen Yun that practitioners of Falun Dafa weren’t allow to keep their faith in China. For instance, in the Chinese dance story “The Steadfast Heart,” Falun Dafa practitioners are attacked by policemen dispatched by the communist regime, according to the program book.

Falun Dafa, or Falun Gong, is a traditional spiritual self-cultivation discipline that includes gentle meditation exercises and teachings of truthfulness, compassion, and tolerance. The practice has been persecuted by the Chinese Communist Party since July 1999.

Ms. Chessik, who was watching Shen Yun for the first time, says she would recommend Shen Yun to “everybody and anybody,” and hopes to come back for future performances “year after year.” Founded in 2006, Shen Yun Performing Arts puts on an all-new show each year.